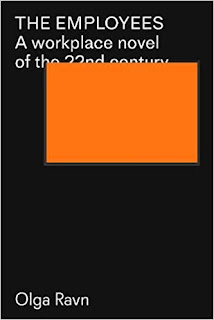 Tony Cross is reading all the books on the International Booker Prize shortlist ahead of this year's awards in June. Here are his thoughts on Olga Ravn's The Employees, translated by Martin Aitken...

The Employees is a science-fiction novel, although I suspect it will be positioned as something else to avoid putting non-genre readers off. Written by Olga Ravn and translated by Martin Aitken it is, as its subtitle suggests, a workplace novel of the 22nd century.

Except it is not just a workplace novel.

The story is told in a series of statements. We never know who is making these statements. They are anonymous numbered statements. Some of the statements are from humans and some from 'humanoids' on board 'The Six-Thousand Ship'. The crew have been collecting objects on a new world, but it seems that these mysterious objects are having a strange effect on both sets of crew members:

"Statement 10
Don't go into the second room. It's not nice in there. You've got the choice, you can make us go in your place. We've already been in there. You can still save yourselves. I don't know if I'm human anymore. Am I human? Does it say in your files what I am?"

As we read more statements, we start to recognise some people and we realise things are getting stranger and darker. Ravn’s skill in building tension through these statements is superb. I often waffle on about arts being a combination of craft (or technique if you would prefer) and emotion. Sometimes you can admire the craft of a book, a painting, or a play but it fails because it does not affect you emotionally. This, I hasten to add, is not an original thought. Ravn manages to balance the craft and the emotion perfectly.

It is a short book, but - like the Eric Vuillard book [read Tony's review here - Ed] - it has a shocking amount of power and ideas packed into its word count. I think there is an astonishing audiobook to be made of this or a Radio 3/4 drama.

My go-to guy for stories about what it means to be human and how we know is, of course, Philip K Dick. I fear though that a comparison with Philip K Dick just gives away the shallowness of my reading.

This is a book that will reward re-reading too. I suspect I will find more in it on each reading and connections I might have missed will click together. If that does turn out to be the case I think this will end up being one of my favourite novels. We should also applaud Martin Aitken for his translation too.

Good translation is a little like magic to me. Obviously, I am never going to be able to see how it is done. I do not read fluent Danish. Even if I did would I be able to pull together a novel that reads like a novel not just a series of technically correct sentences that are without any hint of an author’s own style. Probably not. You can sense I think good and bad translations even if you are not fluent and this feels like a good translation.
Follow Tony on Twitter at @Lokster71
Image - Amazon

The 2021 International Booker Prize celebrates the finest fiction from around the world, translated into English.