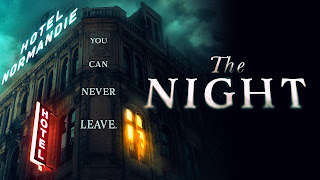 Nightfall brings darkness and sleep, but in the case of Kourosh Ahari’s impressive debut feature, The Night, it’s also the time when things that we have kept in the dark might re-emerge to haunt us.

The Night begins with Iranian married couple Babak Naderi (Shahab Hosseini, last seen in Asghar Fahardi's A Separation and The Salesman) and his wife Neda (Niousha Noor, HBO's Here and Now) attending a dinner party in Los Angeles with their close friends.

Although the evening passes pleasantly and it’s clear that the couple dote on their newborn baby daughter, their friends guess that there's tension in the marriage. It seems that the marital strain is partly due to a long separation which occurred when Babak set up home in America before being joined by Neda, compounded by the disorientation of settling in a new country of which they have little experience.

Throughout the evening Babak complains about suffering with painful toothache which he uses as an excuse for taking strong drink, much to Neda’s dismay. At the close of the party and ignoring Neda’s protestations, he insists on taking the wheel of the car himself.

However, his toothache pain and his state of inebriation cause Babak to drive erratically and, distracted by a malfunctioning GPS, he almost has an accident. Tired of arguing with Neda he exasperatedly turns into a nearby hotel where he decides they should spend the night.

This is the Hotel Normandie in Los Angeles and, after edging past a muttering homeless man (Elester Latham), they enter the lobby and are checked in by the elderly and courteous night receptionist (George Maguire) who offers them the ‘last’ suite of rooms, number 404. Little do the couple know that they may have checked into the equivalent of the Hotel California (and they may never leave).

The tension between the weary couple in their late-night hotel room shows Neda and Babak struggling to keep their problems at bay for the sake of their child. However, we slowly begin to suspect that their long-distance separation before reuniting in America was a time during which the pair had experiences which they must hide from one another and which, in the dead of night, will come back to haunt them.

The apparitions that terrorize the couple seem to be linked to the secrets they are keeping and appear to exert some kind of force which makes it impossible for the guilty to leave the confines of the hotel.

Ahari’s feature is thematically indebted to past horror films revolving around other sinister hotels, The Overlook Hotel, The Great Northern Hotel in Twin Peaks, 1408, The Innkeepers, all spring to mind as places similarly plagued by bad memories.

The Night proves to be an assured debut, particularly inventive in how it manages to create an ominous atmosphere using aural, visual and musical flourishes. From the outset it drops subtle hints about the strangeness of the hotel, such as a disquieting painting in the lift lobby that catches Babak’s attention, or a sign on a door saying ’this is not an exit’. The film is an exercise in suspense and creepiness, getting nerve-shredding mileage out of shadows, flickering lights, dripping taps, buzzing neon, inexplicable knocks on doors and ceilings and even a woman filing her nails in the dark.

Nighttime rooms, hallways, alleys and streetscapes are eerily shot by cinematographer Maz Makhani, giving the suggestion that something, or nothing, lurks behind each door or corner. The score by Nima Fakhrara adds to the discomfort by a quasi-experimental, atonal quality.

Shahab Hosseini and Niousha Noor give naturalistic performances, escalating into panic with the accumulation of occurrences and manifestations that assail their characters through the elongated night, where morning never comes. Noor portrays an anxious wife, struggling to find a life with a man she feels she has ceased to know. Hosseini plays a domineering husband failing to show empathy in his marriage, troubled by a guilty conscience and grappling with the demands of family life in the country that he has adopted.

The Night was shot on location in Los Angeles by a crew in which every department head was Iranian American. Most of its dialogue is delivered in Farsi, and the film is notable for being the first American production approved for theatrical release in Iran since that country's revolution in 1979.

The centre of Ahari’s film is The Hotel Normandie, with its endless night - it brings forth hidden, uncomfortable truths, which materialize into forms to prick the consciences of its inmates. It will only release its captives after they surrender the secrets that bind them. But if a victim does not respond, the hotel will take its own revenge for their duplicity.

The Night is a movie where deceit culminates in an open-ended tragedy, leaving the audience to wonder whether it is the secrets themselves that exert power over the protagonists, or if the secrets are given power by how desperately and deeply they are buried and denied.