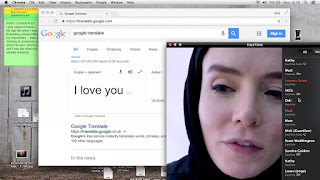 The profile is fake. The danger is real. Inspired by a true story, watch the trailer for Profile, coming to cinemas where available next month, thanks to Focus Features...

Profile follows an undercover British journalist [Valene Kane] in her quest to bait and expose a terrorist recruiter through social media, while trying not to be sucked in by her recruiter [Shazad Latif] and lured into becoming a militant extremist herself.

Directed by Timur Bekmambetov from a screenplay co-written with Britt Poulton and Olga Kharina, the story takes the unusual angle of being entirely played out as if viewed on various apps on a computer screen, and is part of the Screen Life genre pioneered by Timur Bekmambetov. This is something that, although we're used to seeing similar things coming now with pandemic restrictions meaning that film-makers have had to be innovative, was a unique idea back in 2017 when the film was shot.

Profile comes to cinemas from May 14th.