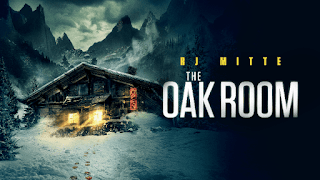 Ren Zelen sat at the bar and watched The Oak Room...

“So, a guy walks into a bar…” is the beginning of countless bar-room stories, and director Cody Calahan and writer Peter Genoway’s twisty neo-noir feature The Oak Room begins in the same way. Adapted from a play, the film is dialogue driven – here, stories are told within other stories, giving the film an unusual Russian-doll-like narrative structure.

On a dark and stormy winter’s night, grizzled bartender Paul, (Pete Outerbridge) is about to close up, when a hooded man stumbles out of the blizzard into his bar. Paul is less than pleased when he realizes that the unexpected customer is Steve (RJ Mitte), the son of his best friend, Gord.

Steve left the tiny town of Kirkland Lake in rural Ontario several years ago to go to college and hasn’t been back until now, not even for his father’s funeral. He receives no welcome from bartender Paul who rips into the young drifter with a stream of bitterness and profanity.

Paul is furious at Steve for abandoning his father and leaving him to take care of Gord in his final days. He slams a fishing-tackle box onto the counter in front of Steve containing Gord’s ashes and demands payment for his trouble and for funeral costs.

All Steve offers in compensation is ‘a story’. He has a tale to tell about a strange event in another bar located nearby called ‘The Oak Room’, and he whips out a coaster from the place to prove its authenticity.

Steve’s story flashes back to a week earlier on a similarly stormy winter’s night, when another bartender named Michael (Ari Millen) was getting ready to shut up The Oak Room bar, and likewise, a mysterious traveler (Martin Roach) blows in at the last minute. He’s tired and freezing in his expensive, inadequate clothing and in dire need of warmth.

They too have a testy exchange, but the visitor provides bartender Michael with the opportunity to tell a story from his childhood, which also happens to involve a father and a freezing night. However, a sense of menace hangs over this particular encounter, thanks to Millen’s unnerving and slyly threatening demeanor as Michael.

Then, back at the first bar, Steve halts the ‘Oak Room’ story midway, provoking Paul’s frustration and causing him to school Steve on the art of how to ‘goose up’ a narrative to make it more interesting. His lesson prompts a story of his own which he uses as an example.

The relationship between the pair grows ever more tense, and as Paul works himself up into increasing levels of resentment, he threatens to call someone who Steve owes money to, obviously a local gangster, and then launches into another story, this time concerning Steve’s deceased dad Gord (Nicholas Campbell).

In this story, Steve’s dad, the hard-drinking, hard-working mechanic Gord, sits at the bar in Paul’s establishment, where, inevitably, he also has a story to tell, this one about a disturbing incident that occurred when he went hitch-hiking as a young man in his early twenties.

It is clear by now that The Oak Room is a film about storytelling exchanges between enigmatic characters, predominantly inscrutable college-drop-out Steve and grouchy bartender Paul. Using them as a framing device, we see all of these stories-within-a-story played out in their individual realities using various actors.

Peter Outerbridge and RJ Mitte quickly establish their antagonistic characters, but the film focusses more on building to a culmination of the plot rather than on the dynamics of the relationships. The Oak Room seems to be aiming at getting viewers to settle down and pay attention to the conversation, rather than the actors. However, this sometimes results in sketched-in characters having overheated confrontations or giving clunky expositions.

If viewers do settle into the slow-burn pace and kaleidoscope of stories, they are rewarded by an effective, twisty, third act. The slow-burn storytelling works at times, but the pacing to get to the payoff might seem too slow for some as the writing isn’t always sharp or specific enough to sustain the complex framework, and too little is revealed about some of the most intriguing aspects of the stories being told.

Working with cinematographer Jeff Maher, Calahan establishes a dark atmosphere and a foreboding tone, one which features faceless, black-gloved men driving to the bar through a snowstorm for a sinister assignation, stark aerial shots of barren trees in the dead of winter and shifty characters who may not be what they seem.

The Oak Room is not quite as clever as it thinks it is, but it is to be commended for its ambition and its refusal to conform to hackneyed cinematic narrative methods. For all of its wordiness and theatricality, it staunchly refuses to dumb-down for the impatient viewer, and sometimes it’s the facts that aren’t revealed that give the film its nightmarish and haunting quality.