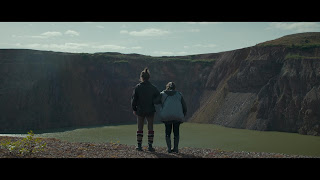 Call Me Human, directed by Kim O’Bamsawin, is a film about Joséphine Bacon, an Innu poet from Pessimit in Quebec. Although in her life she has done other things too, particularly documentary film making.

This is not just a portrait of a poet though. It is the story of a culture, its almost destruction at the hands of Church and State and its survival. In one of her earliest poems Joséphine Bacon described herself as: “survivor of a tale nobody tells.” And once again I am reminded of Anna Akhmatova’s famous poem, Requiem, and the poet as witness.*

Bacon went through Canada’s Residential School System, which forced Innu children into a system designed to educate them out of their Culture. It is a system that burst into the news again recently after the discovery of 215 children’s bodies at the Kamloops Residential School. Administered by various Churches the Residential School System seems to have been designed – intentionally or not – to destroy an entire culture. Genocide is usually used to describe mass murder, but it seems to me that you can wipe out a whole people without killing them all. You just eliminate their culture. Or both. This is what was done in North America and its consequences are felt into the present day. It is what is being done to the Uyghurs by the Chinese government now.

Yet through people like Joséphine Bacon these cultures survive. They can tell their own stories. They can give us a picture of world that is not the same as ours. A culture that sees humanities place within nature in a more cooperative spirit. A culture that is connected to its ancestors and to its land.

We get to hear Bacon’s poetry, which sounds delightful. Bacon herself seems like a nice person. We accompany her on visits to locations from her past and see her in the present. Kim O’Bamsawin also takes us into the Canadian landscape, which is beautiful, where Bacon can talk about Innu life in general and her life in particular.

It is all handled in a low-key fashion. There is no attempt to hammer home any point. The point is illustrated gently and effectively. It is a film that makes you think about what has been lost and the crimes committed by colonial powers to indigenous people without drama. Because that story is told through Bacon’s own life and work. Her voice demonstrates the need for the voiceless to be heard and for different stories to be told.

The most important thing O’Bamsawin has done is let Bacon speak for herself either directly on screen or through readings of her own poetry. That is this films strength. Bacon is a powerful voice allowed to be heard. Perhaps we should listen a little harder.

Find out more about Call Me Human and book tickets to watch online here.
Image - Sheffield Doc/Fest
Email ThisBlogThis!Share to TwitterShare to Facebook