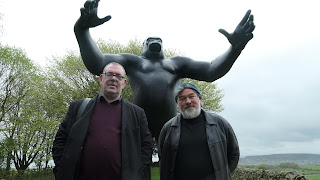 Robert Lloyd was the lead singer of The Prefects and The Nightingales. Bands that never broke through to huge success but were the kind of music much admired by John Peel, whose familiar voice features several times in this documentary. Although Lloyd’s life seems a tad more complicated than simply just being a cult music figure.

Being Stewart Lee, this documentary also flirts with the form a little, so that you know what you're watching is real, even if it is not the entirely true story. There is the moment in the restaurant where Stewart Lee and Robert Lloyd are doing an interview and there is a couple in the background who are asked at one point if this is spoiling their evening. There are similar moments throughout the film, like Easter Eggs. Yes, Stewart Lee seems to be saying, this is an artificial way to tell this story, but that is how it must be.

That combines with Robert Lloyd’s inconsistent memory of events. Throughout the film Robert Lloyd will tell a story featuring another person and they will cut to that person saying, “No, that never happened.” One of the funniest of which is Robin Askwith’s list of all the people he has ever had a shower with. There are a lot of talking heads in this film. Some famous, some not so famous. It covers Lloyd’s whole career though from musician, through to video producer, sit-com writer (attempted), Cookery writer for GQ, Postman and back to being a musician and. It is an interesting journey. 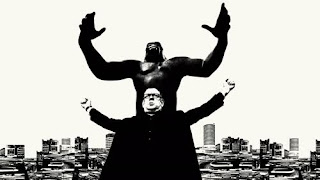 The film also weaves in the story of a statue of King Kong, by Nicholas Munroe, that stood in central Birmingham for six months in the early 1970s. The statue, which left Birmingham unappreciated, was left on its back and damaged over time. However, it now stands a little battered not far from Penrith in the Lake District. Stewart Lee unsubtly but amusingly compares the King Kong statue’s journey to Robert Lloyd.

This is a real labour of love. It is laugh out loud funny at points, but also manages to tell a proper story. Whenever it comes too close to seriousness – and there is a point where Lee and Lloyd are talking at Lloyd’s house where it all seems to be getting a little real - Lee cannot help but try and defuse it, which Lloyd then picks up and runs with. Lloyd is, it should be said, a funny man too. Which makes the whole thing highly entertaining.

Underscoring this film is also an elegy for a lost time. When you could form bands and try and carve out a career in music because you could live on the dole. Now, that kind of thing will get people tutting, but how many people are lost to the arts because they must force themselves into poorly paid work to survive or come out of university weighed down with debt? The luxury of time is lost. Time to grow and develop.

Good documentaries open your intellect and emotions. If, like this one, they are someone trying to convince you that a personal bee in the bonnet has a buzz worth listening to then they are worth watching. Give this a watch. You might find yourself buying some new albums.