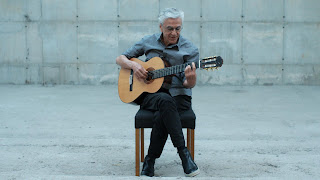 Available to watch online now, as part of Sheffield DocFest 2021, Tony Cross watched Narcissus Off Duty...
Narcissus Off Duty, directed by Renato Terra and Richardo Calil, is – effectively – a long interview with Caetano Veloso, a Brazilian singer-songwriter. It tells the story of his imprisonment, in 1969, by the Brazilian military dictatorship.

It is a film without fripperies. It is simply Caetano Veloso telling his own story. Now I had never heard of Caetano Veloso before watching this film, but the world is different now. Now I can listen to Caetano’s music while I write this review and discover his involvement in ‘Tropicalismo’, which was an attempt to combine Brazilian music with rock-and-roll and other more experimental approaches. It was a divisive style. All this information is easy to find but needed a nudge. That nudge was this film.

Veloso was arrested after accusations by a DJ that he had sung a mocking version of the Brazilian National Anthem at a live gig. This Veloso denied. But he only found out that was why he had been arrested weeks into his arrest.

The story Veloso tells is one of tension and fear. He is held in solitary confinement at first and he feels his spirit ‘drying up’. Then he is transferred. At no point has he been interrogated. He does not even know why he has been arrested. A lot of his imprisonment seems to have involved waiting and dealing with his own fear. He repeats a quote from Roberto Duarte, a fellow Brazilian prisoner and musician: “When you are imprisoned, you are imprisoned forever.”

He is finally allowed to see his wife, Dedé. Most of the time during this interview Veloso tells his story calmly, even when things seem tense. But he tells the story of a Sergeant, whose name he cannot remember, who let Dedé into his cell. The Sergeant walked away and left them to it. On that same visit Dedé gave him a Brazilian photo news magazine, which included the first pictures of the Earth from space. The interviewer gives Veloso a copy of that magazine, and he flicks through the pages. And a combination of the actual magazine, of his memories of Dedé and the nameless Sergeant – who ended up being arrested himself - breaks him down. He asks to stop filming. It turns out these photographs led to him writing a song “Terra”.

There is not much of his music in the film, but he sings “Terra” and “Hey Jude”, by The Beatles. It was a song that came to mean a lot to him in captivity its ending seeming like a promise of release. It became a superstition to him. Hearing it raised his spirits.

Eventually Veloso is interrogated. They have the notes of his interrogation and Veloso reads them out. He finds the style funny. He laughs a lot and then catches himself. He is laughing, he says, but it is not funny. It was serious.

Of course, finally he was released. But that too is a shock and when he talks about his reaction to arriving home you can feel how he almost lost his mind – he compares it to a bad drug trip he once had. The film pretty much ends there but Veloso, and his friend Gilberto Gil ended up in exile in London for a couple of years before returning to Brazil.

One of the interesting threads in Veloso story is the role of class in how people were treated and their reactions to their guards. Indeed, at one point, Veloso points out that class still effects certain parts of society are treated by the authorities. He says, and Ava DuVernay’s excellent documentary 13th makes a similar point about the US prison system – “That’s nothing but a reaffirmation of slavery.” There is a Kafkaesque story of mistaken identity.

This film allows Veloso to tell his own story, in his own words. There are no visual tricks. We just see Veloso in his chair talking, until almost right at the end. The interviewer only asks a handful of questions and never gets in the way. Mostly Caetano Veloso is allowed to just talk, and he has a story worth listening to.
Follow Tony Cross on Twitter @Lokster71
Find out more about Narcissus Off Duty and book tickets to watch in cinemas or online here.
Image - Sheffield DocFest
Email ThisBlogThis!Share to TwitterShare to Facebook