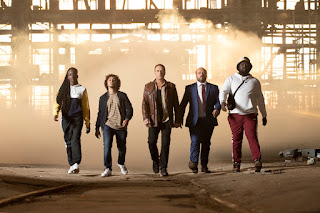 The latest Jean-Claude Van Damme action comedy, The Last Mercenary, heads to Netflix in July. Watch the trailer [and get ready to read subtitles - Ed]...

Richard Brumère, aka "La Brume" ("The Mist"), a former French secret service special agent turned mercenary, is back in the saddle as the immunity he was granted 25 years earlier for his son Archibald is lifted. A mob operation threatens Archibald’s life. To save him, Richard will have to reach out to his old contacts, join forces with a bunch of reckless youngsters from the projects and an offbeat bureaucrat - but mostly find the courage to let Archibald know he’s his father.

Written and directed by David Charhon, the film stars Jean-Claude Van Damme as Brumère, with Samir Decazza as Archibald, Alban Ivanov as Alexandre Lazare, Assa Sylla as Dalila and Djimo as Momo.

The Last Mercenary heads to Netflix on 30th July