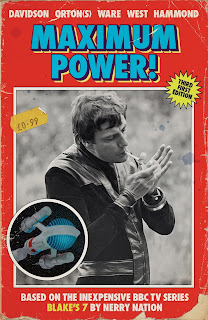 Attention all Blake's 7 fans! The fully unauthorised and irreverent, but highly funny, Maximum Power! Blake's 7 episode guidebook is getting a re-release for charity next month...
"We’ve gone to the effort of watching every episode of Blake’s 7 to save you the bother."

Covering all 52 episodes of the classic 80s series, and written by [deep breath - Ed] Matthew West, Andy Davidson, Robert Hammond, Andrew Orton, Chris Orton and Phil Ware, Maximum Power is...
a new(ish) Blake's 7 programme guide, telling the full untold story (aside from all the other books) most of which we made up, about this fantastic, ridiculous, fun and silly BBC TV hit series.

What you can't learn from this book you could fit in a matchbox. Spray it silver. Stick a ping pong ball on it. Some staples. The nozzle from a glue bottle. Tie a bit of string to the top, dangle it from a light fitting and call it a Zeta-Class Pursuit Ship.

With a foreword from second Federation trooper on the left (uncredited) Harry 'Aitch' Fielder, this book is set to break new sales records for Blake's 7 merchandise – we might just shift more than twenty of them.

First published back in 2012, and back in print for the first time since then, 100% of authors' proceeds from Maximum Power will be donated to benefit Motor Neurone Disease. Released on August 2nd, you can pre-order the book direct from HERE.
Image - Ten Acre Films
Email ThisBlogThis!Share to TwitterShare to Facebook