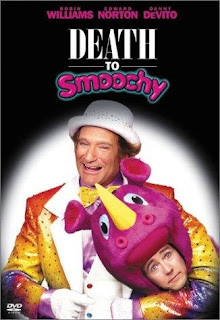 To show our love of Robin Williams on what would have been his 70th birthday, a reminder of Steve Taylor-Bryant's look back at Death to Smoochy...

2002 was an incredible year if you were a fan of Robin Williams. The zany comedy of Mork & Mindy and Disney films were buried, with Robin taking on some darker roles. This particular year’s releases showed the complete range of talents that Williams possessed, Insomnia and One Hour Photo took his more serious roles to another level but it was a Danny DeVito project that I remember as it’s in my top five films of all time list - Death to Smoochy.

Robin Williams stars as Rainbow Randolph Smiley, the children's entertainer on Network television. But Randolph is not what he seems, as the clown is caught out in an F.B.I operation taking bribes from parents to have their children on his show. Randolph is fired by executive Marion Stokes (the excellent Jon Stewart) and a new character is created for the timeslot in the form of Smoochy the Rhino (think Barney the Dinosaur) and his controller Sheldon Mopes (Edward Norton). Randolph finds himself broke and homeless with his drink problem spiralling out of control, and sets about his mission to destroy Mopes and get his job back.

There are rude images inserted into broadcasts, a cuddly Rhino at a Neo-Nazi rally, assassination attempts, depression, corporate greed, a female executive with a fetish for children’s entertainers, and gunfire galore. What more would you want from children’s television?

Only a few people in the entire world could make such a daft and dark story work. Robin Williams is given free reign to take his former insanity to a new level and is incredible as Randolph. Edward Norton is the perfect foil for Williams, playing the almost boring straight laced guy Sheldon Mopes and DeVito in both a starring role and in his direction manages to produce a film that had no right to made but I am so very glad it was.

The film was a financial flop and roundly criticised on its release but those good folk (including Roger Ebert) missed the point. The film wasn’t supposed to be realistic, it was always meant to be a cult comedy, so please don’t be like the critics and watch the film expecting typical humour. This is tongue firmly in cheek, boundary of decency pushing, chaos at its very best carried out by a cast at the top of their game, Williams especially.