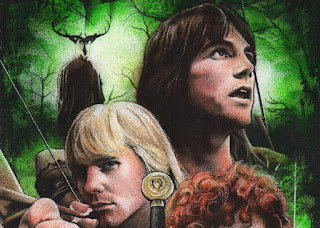 Everyone loved getting a Robin of Sherwood TV Annual for Christmas back in the 80s and now's your chance to relive that excitement, but you'd better be quick! You only have until FRIDAY 9th July to pre-order your limited edition copy of the ALL NEW Robin of Sherwood Annual 1987 from Chinbeard Books...

Robin of Sherwood was an iconic, some say definitive, take on the Robin Hood legend. At the time, one of the most expensive series ever produced (and it shows), with an evocative theme tune and score by Clannad, it gained international appeal and still continues to inspire and fascinate to this day.

Running for three series (two for Michael Praed’s Robin and one double-length series for Jason Connery’s Robin), from 1984 to 1986, its strength was in its concept and writing by Richard ‘Kip’ Carpenter, its direction (by visionaries like Ian Sharpe and Robert Young) and its brilliant casting (the Merry Men are all still close friends to this day).

Chinbeard Books have been lucky enough to have received the license for producing literary work on the series, with new adventures in book form being released over the last few years. One of the things fans often clamoured for was the rare 1986 Annual, which featured just Michael Praed’s Robin. As with TV tie-in Annuals of the time, it’s a particular beast – with the requisite Behind The Scenes article and photos, as well as all the regular things you’d expect in an Annual from that decade.

Sadly, as the show never made it to another series (although one was in production and very near to starting, when the co-financier, Goldcrest, got into financial trouble because of their film-making side), so another Annual never materialised.

The brand-new and official 1987 Annual is the annual that fans wanted but never got, featuring both Praed’s Robin and Jason Connery’s one; drawing from all the series rather than just half of it.

Barnaby Eaton-Jones (editor and head-honcho of Chinbeard Books says: ‘I was determined to make sure this Annual both became a homage to those I read as a child but – as I’ve been the ‘torch bearer’ for the show for a few years now – was faithful to the show and the actors and crew who worked on it.’

Included within the annual will be several interviews (including Anthony Horowitz, the famed writer who got his break writing for the last series of Robin of Sherwood), a comic strip, a few fact files, behind the scenes articles and unseen photos, a quiz, a new illustrated prose story by Jennifer Ash (who has written many of the audios and books of the revived official line), sumptuous artwork, and lots more.

It is intended to be a proper celebration but still put together as if the series would have come back in the form that the late creator/writer Richard ‘Kip’ Carpenter intended with his proposed revival at the end of the 1980’s – which was meant to happen – with a little piece about the ‘upcoming’ The Knights of the Apocalypse television movie.

Of course, this particular script became the basis of the official return of the show on audio (and in book form), with all the original cast, in 2016 when Barnaby Eaton-Jones produced it for Spiteful Puppet Ltd and ITV Studios Global. But this version will be a ‘What If?’ using ideas from Kip himself.

This brand-new, official Annual is being funded by pre-orders – as every contributor is being paid, unlike the ‘unofficial’ Annuals that have popped up recently from other classic and cult television series which are non-profit ventures to avoid licensing issues. This means that it’s also a limited edition as the print run won’t be large, due to the cost of putting such a book together (and printing it in A4 hardback, like Annuals should be!).

If you can help fund it by pre-ordering a copy (it is due for release in November this year, for everyone’s Christmas stocking!), Chinbeard Books only need about 25 more pre-orders before their target is met.
The deadline for pre-orders is Friday 9th July, so don’t delay… order today!

PRE-ORDER your own 1987 Annual NOW from www.chinbeardbooks.com
Illustration above by Richard Young, which is a sneaky peek at a fuller piece of artwork.
Email ThisBlogThis!Share to TwitterShare to Facebook