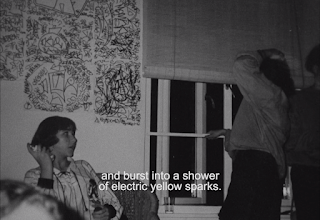 “We were teenage acid casualties.” Morgan Quaintance’s account of adolescent experiences with psychedelic drugs – told through still images and on-screen text – is contrasted with the transcendental promise of consciousness expansion advocated by the likes of Timothy Leary on the soundtrack. Quaintance’s highly personal narrative exposes the crude reality and violence of growing up in South London in the early 1990s (“there was no fourth dimension”) and is written from the perspective of the survivor.

Morgan Quaintance has created with Surviving You, Always an 18 minute gem of a film that had me hooked visually, aurally, and thematically. In fact, film is probably not the right term here, it's more of a collage of footage and stills, all in black and white and degraded and blurry, and of story. A still is presented to the audience and in text the filmmaker tells of a memory or a feeling or a collection of all emotions attached to that image but, whilst the audience is reading, there are excerpts from a lecture by renowned American Psychologist and advocate of psychedelic drugs Timothy Leary. This genius stroke from Quaintance instantly captures your attention and makes sure you are concentrating because this is not a film with subtitles reading the words you are hearing; this is two elements of storytelling vying for attention simultaneously and if you are not committed to watching and experiencing the film you will miss out and wonder what is happening.

To break up the narrative, both written and aural, there is grainy footage, sometimes a schoolyard, sometimes an estate, with music of varying styles that are again important in directing your attention to what it is you need to see. From light choral work to the more ominous orchestral to the punk song end credits, the music is selected for this collage as expertly as the imagery has been. Add in narrative from Leary and Ramm Dass, themes of drug taking, young love, loss and loneliness and what you get is a visual representation of what a life experience feels like.

Morgan Quaintance has produced a short form masterpiece that took a hold of my very being and took me on a journey that I was not a part of and yet all too familiar with. The artistic styling of Surviving You, Always may not be for everybody but I was blown away at how quickly and how hard this film took hold and affected me. If you only get the chance to see one film at Open City Documentary Festival this year, then I urge you to pick this one and see if it causes the same profound reaction in you that had on me.

Follow Steve on Twitter @STBwrites
Image & synopsis - Open City Documentary Festival
Surviving You, Always has been announced as the Best UK Short Film at this year's Open City Documentary Festival, which runs online until 23rd September. Find out more about the festival and browse the online programme here: https://opencitylondon.com/
Email ThisBlogThis!Share to TwitterShare to Facebook