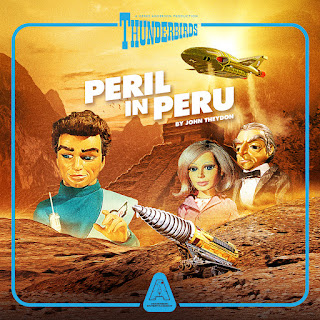 Thunderbirds are go with a FAB feature-length audiobook featuring a specially assembled cast coming next month from Anderson Entertainment and Big Finish Productions...

Written by John Theydon and originally published under the title Calling Thunderbirds in 1966, the second Thunderbirds novel is now available to pre-order as a brand new, full cast audio adaptation.

In Peril in Peru, Thunderbirds are go as International Rescue, Lady Penelope and Parker combat the Hood, in a deadly quest for lost Inca treasure in the jungles of South America.

An early warning of disaster brings International Rescue to Peru, to assist in relief efforts following a series of earth tremors - and sends the Thunderbirds in search of an ancient Inca treasure trove, hidden beneath a long-lost temple deep in the South American jungle.

When Lady Penelope is kidnapped by sinister treasure hunters, Scott Tracy and Parker are soon hot on their trail! Along the way they’ll have to solve a centuries-old mystery, brave the inhospitable wilderness of the jungle, and even tangle with a lost tribe - with the evil Hood close behind them all the way...

Producer Jamie Anderson said: “I'm over the moon that the International Rescue team is back for another thrilling adventure! Our brilliant cast and crew have turned out another FAB adventure, full of all of the excitement, adventure and glamour you'd expect from a Thunderbirds story. I know Dad would have loved to hear these continuing adventures, and the entire team has done him proud once again!”

This audiobook, an adaptation of John Theydon's 1965 book Thunderbirds, is the second of Anderson Entertainment's new range of audio versions of classic Gerry Anderson stories from the 1960s and 1970s, thanks to a new licensing deal with ITV Studios.

Thunderbirds: Peril in Peru is now available to pre-order as a digital download, exclusively from www.bigfinish.com. It is also available as a four-CD box set that includes a behind-the-scenes documentary, alongside a hardcover reissue of the original book, exclusively from shop.gerryanderson.co.uk.