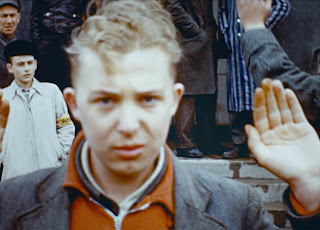 “You could see the smoke from the chimneys.”

This was the last film made by Luke Holland. It features a series of interviews with Germans who had lived through Hitler, the Holocaust, and the War. Some of them were members of the SS, some were in the Wehrmacht, and some were normal civilians at home.

It is explicitly voices from the past. There are, except for a couple of sequences, no voices from their families or from the current generation. It is also interesting that these people chose to speak to Luke Holland. Why?

Whilst we hear personal stories the film also quietly condemns the argument by post-war Germans that they didn’t know what was going on. It shows how early the indoctrination of young Germans started. Also, there is a lot of denial from some of them about what their units did and what they were responsible for, which Luke Holland undermines immediately with an interview with someone else.

Naturally they were all quite young and, mostly, relatively junior in Nazi Germany so it is easier for them to say that they were just doing what they were told or that they didn’t know, but as the interviews go on it becomes clear that they did know. The reason I highlight the “smoke from the chimneys” quote is that people living near concentration camps were more than aware what was going on. The camps were a huge network. People saw prisoners marching to work or back. Or worked in places where they saw how prisoners were treated. They knew what was happening. They just chose to talk about it quietly.

Luke Holland quietly also pops the bubble of ‘if I hadn’t done what I was told to do I would have been shot.” Whilst as the war ended military justice became incredibly ruthless but the evidence suggests that if a soldier didn’t want to get involved in something they could quietly withdraw and nothing much would happen to them.*

One of the horrors of the Third Reich is that it shows you how easily people who are ‘normal’ people will become bystanders or perpetrators. What I have come to think in recent years is that with events like The Holocaust there is no difference between bystanders and perpetrators. If you aren’t opposed, you are complicit.

And it is, as the film makes clear, easy to be complicit when everyone around you is. But the Holocaust relied on more than just soldiers and guards to get done. It needed administrators, train drivers, accountants, bookkeepers, secretaries, bakers, stone mason, grocers etc. The film does a good job of gently making that clear.

The only thing that we never hear really is any empathy towards the victims of the Holocaust. It is all talked about in a cold way as if no one wants to go down that route because either their feelings about Jews will be revealed as being basically unchanged – which is what one or two of the interviewees make you think – or that they’d have to really deal with their complicity at an emotional level.

If there is a lesson from this film is that the earlier and more firmly you resist fascism the better. It is why you must stand up for the rights of everyone, even people you are told don’t deserve rights, because taking those rights away makes it easier to do so from the next group of people. It’s the centre of what Martin Niemöller’s poem is about. You must speak up for everyone they come for.

This is a film worth watching even with my caveats.

The film starts with a quote from Primo Levi. I’m going to end my review with that quote.

“Monsters exist, but they are too few in number to be truly dangerous. More dangerous are the common men, the functionaries ready to believe and to act without asking questions.”


* Ordinary Men: Reserve Police Battalion 101 and the Final Solution in Poland by Christopher Browning is worth reading for some discussion about this.