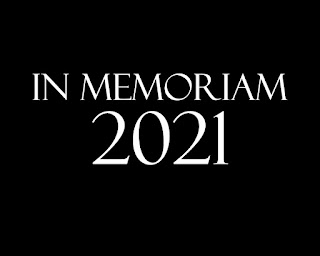 Before we leave 2021 in the past, Susan Omand spares a thought for just a few of the film, book, gaming and TV people that we lost last year...
It's been a tough year for a lot of us but there is always time to spare a thought for those who are no longer with us. Some of these names will be more familiar than others as always but every one of them is important in their own way. This is by no means an exhaustive list - every year there seem to be always far too many - so these are just a few, in no particular order, that I thought were worth a mention. [if you want to find out more about them, they all have a wiki page - Ed]