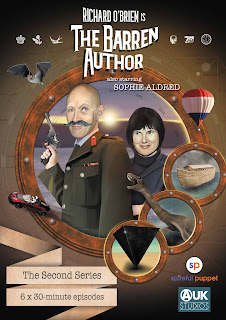 The first series of The Barren Author was a loose and up-to-date adaptation of The Adventures of Baron Munchausen, with an open-ended finale that allowed your mind to wonder where Richard O’Brien’s fantastical character would go next. Well, wonder no longer as Spiteful Puppet and AUK Studios bring you six 30-minute episodes of the second and final series, which starts at the place the last series left off.
The Brigadier (Richard O’Brien) returns for more extraordinary adventures with Smith (Sophie Aldred), his kind but skeptical publisher. Fresh from having shot himself out of a cannon, the Brigadier suddenly discovers he has the rather annoying ability to travel through time. This rather unusual power comes at a high cost. Whether it will be enough to save himself, save the planet, and save his only friend is another matter altogether. The fateful clock is ticking, and time is surely running out.

Richard O’Brien, of Rocky Horror Show fame, and Sophie Aldred, from Doctor Who, form a delightful double-act as the Brigadier and Smith in this road trip that shoots to the stars and back (as well as through time); all whilst avoiding Barnaby Eaton-Jones (who also directs and produces) as their evil nemesis, St. John Lawrence-Mulcaster. 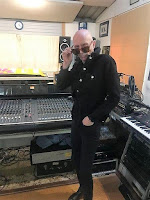 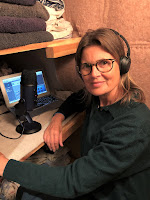 Richard O'Brien said, “Anybody who has been blessed with the power of cognitive reasoning will have noticed that our world is now overly full of people who have opted to embrace fantasy over reality and often with tragic results. To have been able to play an amiable, old romancer, without any deep seated, political agenda has been both pleasing and amusing while, at the same time keeping make-believe, firmly where it belongs, in the realm of entertainment.”

Sophie Aldred added, “We’re back, we’re bigger, better and even more bonkers! I hope you enjoy listening to our latest antics in this crazy world as much as I did recording it!”

Paul Birch, as the writer of the first series, also returns to pen these six new episodes of the second series. He said, ’I loved returning to the telling of tall tales and writing again for such a talented cast. We’ve made a second series which is bursting with even more comic joy than the first and I think everyone could use some of that right now. It’s gloriously fun set of adventures and we promise to transport you to some unexpected places and in very good company!’

Barnaby Eaton-Jones added, “The first series of The Barren Author was supposed to be a one-off, but left gloriously open-ended, so the audience could take themselves on their own flights of fancy afterwards. But Richard O’Brien had so much fun doing it that he floated the idea of second series and, as long we promised it would match, expand, and better the first series, then he’d be happy to return for one more time.

“I think we’ve done that, and we’ve been delighted to include more of Smith this time as well (and the Baron’s evil nemesis, St. John Lawrence-Mulcaster too). The second series kicks off directly after the first series finishes, and this time it really *is* the final series for the Baron/Brigadier. It’s been a genuine joy to bring this all to life alongside such an incredible cast and crew, so please hop aboard The Barren Author one last time to experience the final flights of fantasy he’ll take you on.“
With Paul writing and Barnaby directing and producing, sound design of the new series is by Joseph Fox and music by Abigail Fox. The graphic design and illustrations are by Robert Hammond.
The Barren Author – Series 2 is available direct from www.spitefulpuppet.com, as well as Audible, and other digital platforms. But, never fear if you haven’t heard the first series [available on Audible in full here], as we want to share a special free taster of the very first episode, converted into this glorious half hour long Audio Comic:
Images - Spiteful Puppet/AUK Studios
Email ThisBlogThis!Share to TwitterShare to Facebook