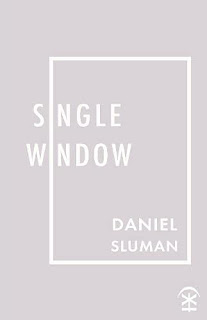 Tony Cross is reading all the books shortlisted for this year's T.S. Eliot Prize. Here are his thoughts on Single Window by Daniel Sluman...

Single Window is the third collection of poems by Daniel Sluman. It's damn good. It might be the most personal of the collections in the T S Eliot Poetry Prize shortlist, alongside C+nto and Othered Poems.

Regular readers of my reviews will know that I fall back on Anna Akhmatova's 'Requiem' for the quote that emphasises the role of poet as witness. Here Daniel Sluman lays bare his life for us to witness. The stark reality of a year in the life of a disabled person living in modern Britain. It is also a love story.

It is, effectively, a journal of the year 2016 when he and his wife, Emily, found themselves unable to safely climb the stairs to their bedroom. It meant that they spent 24hrs a day on their sofa with only a single window through which they could watch the outside world. It is divided into four sections, each named after a season of the year, starting with autumn. Sluman introduces us to the routines of pain management and survival.

The sections also feature photographs that make this more than just a poetry collection and more an artwork. It's a route Caleb Femi went down with Poor [read Tony's review of that book here - Ed]. Indeed, you could make a double bill of Poor and Single Window to get an insight into what modern Britain looks like if you are on the edge of it as opposed to being seen as fully part of it.

The poetry is fantastic. It is brutally honest and straightforward. The straightforwardness makes them more powerful. It subjects are pain, loneliness, love, family, need and he also shows us how time slips and slides away from you in their circumstances. How the morphine for the pain steals time from you and how the whole process makes you feel like you are being robbed of yourself.

It is also a love story. The relationship between Emily and Daniel, despite everything that each of them suffers from, is the core of the collection. There's one section where Daniel describes Emily oiling Daniel's stump. It is one of the most moving parts of the collection, for me.

"...this is how it feels
to have your trauma held
i tell you your kindness kills me
your grace kills me."

None of that though stops us from seeing the difficulties they are facing.

This collection shows us the reality of a life that we would not see. I hope you get a chance to read it. Because it is worth it.
Follow Tony on Twitter @Lokster71
About the T.S. Eliot Prize