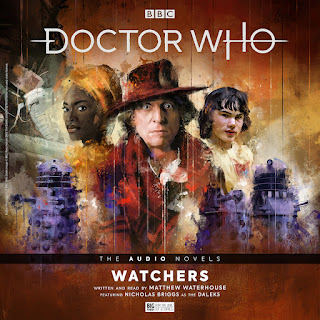 Be immersed in the 1980s with the latest adventure in the Doctor Who – The Audio Novels collection, out now from Big Finish Productions...

Matthew Waterhouse’s compelling narration takes listeners along for the ride in Watchers, as the Doctor fights to escape the Vortex and his old nemesis – the Daleks! With a specially composed soundtrack and effects, plus Nicholas Briggs voicing the Daleks, expect to be fully transported into the Who-niverse.

The six-hour enhanced audiobook bridges the gap between the 1981 Doctor Who stories The Keeper of Traken and Logopolis, in which Waterhouse originally played Adric, the Alzarian mathematically genius and companion of the Fourth Doctor (Tom Baker).

When the TARDIS is trapped in the Vortex, the Doctor and Adric realise that there is something immensely powerful that is draining time itself from the universe.

The wrecks of other time ships –the products of countless experiments in time –exist in a fused cluster in the Vortex. None of them can escape and many of their crews are dead. As the Doctor tries to free the TARDIS, he and Adric encounter threats from other groups, desperate to escape, including a hostile reptile species, mechanically enhanced cyborgs –and Daleks!

But there is someone from the Doctor's own world who is watching.

Someone who will prove useful when this Doctor reaches the end of his life... 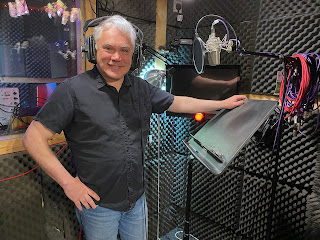 Writer and narrator Matthew Waterhouse said, “Having been associated with Doctor Who for 40 years this is, in some regards, artistically, the single richest experience I’ve had with it. Putting together a 60,000 word novel of considered prose is obviously real, challenging work but I didn’t find it difficult in any negative, onerous way. Big Finish has always been supportive of my work and they were very supportive of this.”

This audiobook sees an ominous return of the Daleks. “Their kind of icy villainy is fun to do,” Waterhouse continued. “As a child, Doctor Who met my imagination halfway and perhaps those old serials – or my memory of them – still remains. I found I could nudge my story to where I wanted to go with it while still creating, I hope, the texture of a ‘classic’ Doctor Who complete with cliff-hangers.”

Nicholas Briggs, who makes a special return as the Daleks, added: “I really loved Matthew’s script. When I was sent the storyline for approval, I knew it was going to be good. Matthew has a real flair for storytelling and the plot has great energy to it. I enjoyed the many and varied Dalek voices to perform in the script. I recorded separately to Matthew but I know he’s a brilliant narrator and I can’t wait to hear the finished production.”

Doctor Who –The Audio Novels: Watchers is now available to own as a digital download for just £17.99, exclusively from www.bigfinish.com.  The previous release, Scourge of the Cybermen, is still available at the same price.

Big Finish listeners can save money by pre-ordering all six titles in the Doctor Who – The Audio Novels range together as a bundle for just £99.
Image - cover art - Claudia Gironi,
photo - Matthew Waterhouse at Audio Sorcery (c) Paul Midcalf
Email ThisBlogThis!Share to TwitterShare to Facebook