Film - Margrete: Queen of the North 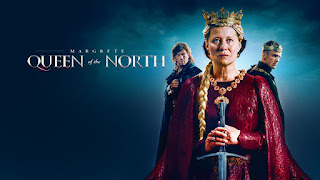 A conspiracy against the union is brewing. Coming to digital platforms in March, thanks to Signature Entertainment, watch the trailer for Margrete: Queen of the North...

Margrete: Queen of the North is a tense and powerful historical epic about the untold story of the woman who united Scandinavia in a time of war.

The year is 1402. Margrete has achieved what no man has managed before; she has gathered Denmark, Norway and Sweden into a peace-oriented union that she single-handedly rules through her young adopted son, Erik. But the union is beset by enemies and Margrete finds herself in an impossible dilemma that could shatter her life's work.

This epic tale about power, corruption and war machinations was directed by Charlotte Sieling and stars Tryne Dyrholm (In A better World, The Commune), Soren Malling (The Killing, Borgen) and Thomas W. Gabrielsson (The Bridge, A Royal Affair).

Signature Entertainment presents Margrete - Queen of the North on Digital Platforms from 14th March
Email ThisBlogThis!Share to TwitterShare to Facebook