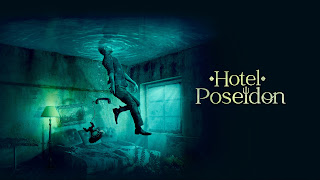 Hotel Poseidon, along with a host of brand new extras, is available now on ARROW. Watch the trailer...

Imagine David Lynch filming at the Overlook from The Shining, with interior decoration akin to the Hotel Earle from Barton Fink, and you’ve got Hotel Poseidon - a seriously run down, and extremely strange place where nightmares and reality collide. The last thing you’ll have is a relaxing stay - but it’ll certainly be a memorable one...

A day in the life of reluctant hotel owner Dave – a man troubled by nightmares, his neighbour, his friends and love. Dave’s existence is hopeless. His days and nights blend into each other as he wanders vacantly through the halls of the Abandoned and dilapidated Hotel Poseidon, which he inherited from his deceased father. When a young woman knocks on the hotel’s door looking for a room, while Dave’s best friend wants to throw a party in the backroom, and a recurring dream haunts him, a surreal and grisly ordeal is set in motion.

An unconventional story, bordering on the surreal and at times the fantastic, the film eschews conventional narrative rules in favour of the enigmatic internal logic of a nightmare. As curious characters occupy the rooms and corridors of the hotel, we find ourselves in a dream-like universe infused with grotesque surrealism: a style imprinted on the Belgian artistic DNA.

Hotel Poseidon was produced and financed by the Belgian theater company Abattoir Fermé, a well-established name in theater circles, often lauded for its far-out visual fantasy and the cinematic quality of its stage plays. It seemed like only a matter of time (and the right circumstances) before they would venture into producing a full-length feature film.
Extras include: