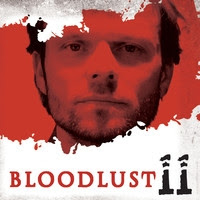 Susan Omand heads back into the gathering storm of Dark Shadows (with some spoilers) as she listens to episode 11 of Bloodlust ...

Hell has a name and its name is Collinsport.

After a short recap, we begin this episode at the Blue Whale where Ed is dumbstruck at what Kate has done as she begs him for help. Meanwhile Sheriff Maggie Evans decides not to keep her blood test a secret and asks Mike Devereux, who has been helping out at the Sheriff’s office, to take her to the cells. She puts Mike in charge until her Deputy Eric arrives in the morning, unaware that Eric won’t be turning up for his normal shift. At the Blue Whale, Harry and Cody takes a shocked Jackie home as she asks whether Kate is the one who has been attacking people.

Angelique and Barnabas are worried for Quentin, Tom and Amy who have yet to return from Collinwood. Barnabas suggests they go themselves but Angelique wants him to explain where he was overnight, accusing him of turning someone into a vampire. He admits he did and it was Kate.

Quentin tries to comfort a hysterical Amy after they left Tom in Collinwood as a werewolf. Quentin admits there is no peaceful solution now but says he knows who the enemy is. Amy however vows to kill the Collins family if Tom has been hurt in any way.

Barnabas tries to explain his actions to Angelique, saying that someone summoned him to Widow’s Hill and told him to turn Kate. Angelique tries a memory spell on Barnabas to see if he can remember who he met. The first answer he comes up with is a surprise.

Ed has knocked Kate out and taken her to the Sheriff’s office where he tells Mike that Kate is a vampire and has killed Frankie and Eric then asks where Maggie is. Mike explains he had to lock her up too because of the bad blood test and says he will call in the other deputies to go back to the bar with Ed.

Barnabas thinks his memory is playing tricks on him and, indeed, the second memory he comes up with for whom he met is different. As is the third, fourth and fifth. Angelique understands that someone is toying with Barnabas’ memory and they need to find out who and why there is such a hold over him.

Cody and Harry get Jackie home to her mother. Jackie explains to Rhonda about Kate. They all plead with Rhonda to try and stop what’s happening, saying she’s the Sheriff. Rhonda, however, doesn’t believe that Kate could do this and thinks there’s something else going on. They all head into the Sheriff’s office.

Up at Collinwood, Carolyn is still chanting and David Collins taunts Tom the werewolf. He wakes Carolyn from her trance and tasks her with finding Quentin and Amy. David then decides what to do with Tom to cause the most havoc in the town.

Rhonda and the kids turn up at the Sheriff’s office and ask to see Maggie. Mike explains the problem and asks Rhonda to come back to the office in the morning to help him, saying they all need to work together then sends them home because of the curfew.

Angelique and Barnabas are still trying to work out who’s causing the problems and talk about Barnabas’ infatuation with Maggie being the hold that their enemy has over him and we hear the true voice of the enemy telling Barnabas to turn Kate.

Kate finally wakes up alongside Maggie in the cells and they talk about Maggie’s past and her involvement with Barnabas. Angelique meantime gets angry at Barnabas for loving “pathetic women” and causing trouble in order to save them. Barnabas retorts that Angelique’s love for him is to blame because she initially turned him into a vampire. Angelique decides that Maggie must die.

Harry returns to the Sheriff’s office to speak to Mike about his wife Melody, the victim of the very first murder. Down in the cells, Kate is getting hungry again, wanting the blood of a child in the next cell but Maggie tries to stop her. A person in the shadows distracts them both; it’s Rhonda, who tells Maggie she’s being broken out...

After a fairly thoughtful episode last time, it’s all happening this week and was very enjoyable. Lots of different story threads start to come together along with the people and it’s building well towards the big final battle. Again great writing and excellent pacing meant the story was easy to follow while never letting up on the suspense. I was pleased too that there were still some real surprises in the story, Kate’s fate being one of the most unexpected. The acting too was very good this week, with Amy’s hysteria at the start being especially believable, and the chemistry between the whole cast shone through near the end better than ever before. So we finally know who has been behind all the attacks and the scene is laid for what should be a superb “set piece” finale over the last couple of episodes. The question for me now is will Ed’s actions mess up the plan?

The episode is available direct from Big Finish