Audio - Doctor Who: The Spectre of Lanyon Moor 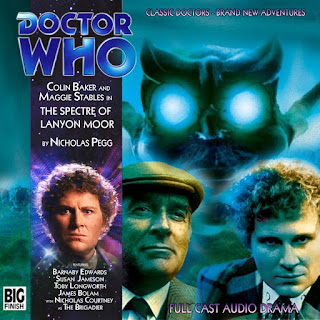 Our Doctor Who audio expert, Tony Cross, delves into the back catalogue available from the Big Finish website. Today is the Sixth Doctor and Evelyn Smythe adventure, The Spectre of Lanyon Moor ...

The Spectre of Lanyon Moor is the Big Finish story I have probably heard the most. I bought it on cassette tape - Google it young people - a long, long time ago and must have listened to it ten or twelve times since then. And it is as fresh and entertaining now as it was the first time.

That's not because the plot is drastically original. In fact it bares a resemblance to both The Daemons and Quatermass and the Pit. There's a thing lurking on the Moors - actually that sounds like The Hound of the Baskervilles now I think about it - and it has been there for a long time. It wants out. And its appearance has a touch of the mythological about it.

We're in Cornwall. The forgotten Celtic bit of Britain. The one with the Pixies and Goblins, of tin mines and fougous.

Ah fougous, mysterious stone-age structures whose purpose has been lost in the mists of time. They're either shelters, storage units or places of religious significance. No one is quite sure. The fact they align with the prevailing winds makes me think that they weren't built for comfort. Anyway this is a Doctor Who blog, not a site for archaeological musings so let us move on.

The best thing about a fougou though is that it is central to this story and there is something immensely pleasurable about the word fougou, especially when spoken allowed. More especially when spoken by Colin Baker who gives the word all the oomph it deserves. I wish I could find an excuse to feature it more regularly in conversation. Even writing 'fougou' has a certain pleasure. Fougou. Fougou.

Which is one of the reasons I like this story so much: the performances. Colin Baker is majestic in this. Big Finish seem to 'get' the Sixth Doctor. They make you realize how good a Doctor Colin could have been. And this story you could quite easily see fitting into the 80's Doctor Who. Although the monster de jour would almost certainly have been disappointingly realized.

Colin Baker apparently had a cold when recording this story, which is referred to in passing by Evelyn in the story. You'd never know. His voice and delivery seem undiminished. It's a bravaro performance.

As is Maggie Stables's Evelyn Smythe. She and the Sixth Doctor make a fine pair and she's not slow in getting involved in the heart of the mystery. She does investigating, escaping and taunting of villains with panache. Her interactions with Sir (Archibald Flint are almost Doctoresque.

The other highlight in this story is that we get a chance to fix one of Classic Doctor Who's unfortunate lapses. The Sixth Doctor gets to meet the Brigadier. Hurrah. (And no I am not counting Dimensions in Time, which I refuse to even acknowledge the existence of. 3D or no 3D.)

Nicholas Courtney is fab. As usual. The Brigadier is retired. But old soldiers never die and it turns out he's been working undercover. This is actually a brilliant story for the Brigadier. He gets to react to a new Doctor's arrival with magnificent coolness and really it is the Brigadier that save the day here. It that respect it reminded me of Battlefield, which is nice.

There a number of 'villains' in this story. Each of whom is acting out of a kind of revenge fantasy. Sir Archibald Flint (James Bolam in fine aristocratic fettle) has delusions of aristocratic grandeur fueled by a belief in his mystical destiny. Mrs Moynihan (Susan Jameson) wants revenge on all those who she perceives have slighted her stoked by her husband fleeing with his secretary. The combination of Nicholas Pegg's writing and Susan Jameson's performances makes Mrs Moynihan a Joyce Grenville creation gone poisonous. Well, gone humourless. Unjolly hockeysticks if you like.

Finally there is the creature itself : The Tregannon - which is a nicely Cornish name for an alien species - whose name is Sancreda. He's angry at his brother for abandoning him, at Sir Achibald for leeching off of his power and Mrs Moynihan for exploiting him for her petty revenge. Then he's angry at the entire planet Earth, which is a tad unnecessary. His malevolence is given life by an excellent performance by Toby Longworth who also plays grumpy Welsh archaeologist Professor Morgan. The nasty little giggle that Sancreda gives before getting up to mischief is a rather lovely touch.

There's a lot of unfortunate and unpleasant deaths. One in particular borders of the genuinely uncomfortable to listen too.

So listen to this not for massively original plots or spectacularly nuanced characterization but revel in the performances. If there's isn't a perfect Sixth Doctor story out there then this will do in the meantime.

Give it a listen.