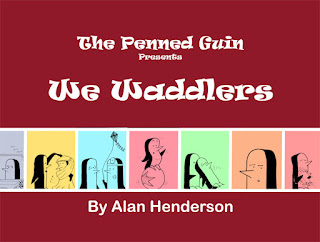 Susan Omand takes on another collection of fun from the punning penguins of Alan Henderson's Penned Guin as she reads We Waddlers...


I’ve reviewed a couple of Alan Henderson’s books on here before, his mini comic Sculpted most recently and, before that, one of his Penned Guin books, Melting Pot. I love the humour of his regular online Penned Guin comic strips, so I was delighted to get a look at the latest book, We Waddlers. The jokes are even older and the puns are even groanier this time than before but that is not a bad thing as the fact is regularly acknowledged within the strips themselves and this knowingness makes some of them even funnier, as the “glint in the eye” really comes across as some of the better/worse jokes unfold.

The comic strips this time are grouped together in related themes in the book so one strip can build off another. The Paris one in the travel section was so funny it had me snorting coffee, the science theme ones were cleverly thought out, especially the static electricity one, and the film posters are all inspired – I want a Reservoir Guins poster for the wall now. There were themes that I think could have been expanded upon more, like the monks and the illuminated manuscript, as I think there is still a lot of mileage in the idea, and there were themes that didn’t work quite so well for me but we all find different subjects funny, so having such a variety in one book is a very good idea as there will be something for everyone. I was also very pleased to see that the Penned Guins still make great use of the comic strip layout itself as part of the fun, changing or using the size and shape of the boxes in some way, making the action overlap the edges or even come completely outwith the boxes to make the joke.

If it was me compiling the book though, I would have left out the One o’Clock Gun cartoon, where the Guin (why, oh why did he miss the One o’Clock Guin pun?!) is used as a character to illustrate a random fact about Edinburgh, explained in a paragraph underneath the strip, in a similar way that primary school posters try to get kids interested in brushing their teeth or eating vegetables. Maybe it feels incongruous to me because there was just the one of this type randomly included near the start and having more scattered throughout the book may have worked better, like ad breaks. Taken as a standalone outwith the book setting it’s fine, if not funny, and it would work in a school book but, as with the similar information-imparting cartoons I found in Melting Pot, it didn’t sit well within the context of the other comic strips and felt like that bit at the end of the He-man cartoon where they tried to teach you something. However, as I said, the science themed strips in this book DID work as I found them funny as well as informative, I think because the Guins were still treated as the focus of the strips and the information was a by-product – maybe it’s just me.

Other than that small issue though, this is another great mix from the pen of Alan Henderson with the usual clever humour and fun drawings of the lovable Penned Guins that I have come to expect from him now. We Waddlers will definitely raise a smile and I recommend having a coffee-clean-up cloth to hand just in case.

Buy the book direct from the author here.