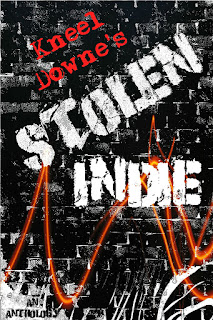 Tomorrow sees the release of an anthology of work by new and established independent writers, brought together by the Blurbmaster, acclaimed author Kneel Downe...

Back in March of this year, author Kneel Downe asked for entries to be submitted through his VirulentBlurb website for a charity anthology with a theme of STOLEN. The only stipulation was that the entries had to fit the theme and be under 1000 words long. The stories and poems came flooding in from all over the world and two months, and many hours of reading, arguing and selecting later, the resulting collection of 15 short stories and poetry is published tomorrow.

Even though all the authors, some of whom have never been published before and others who are well established as independent writers, kept to the STOLEN theme, it was interpreted in many different styles and the collection spans the genres, from sci-fi to romance to psychological horror. Never one to shy away from difficult and hardcore topics, Kneel has chosen work that deals with both physical and emotional loss, from the poignancy of lost love, through the emptiness of stolen dreams to the brutality of abuse. This may be a small book but it will leave the reader with a lot to think about.

As well as giving a platform for independent writers, Kneel also wanted a distinctive cover for the book and asked for artwork to be submitted as part of the anthology call. The winning design (above) is by Trevor Bartlett and captures both the edginess of the theme and the essence of what it means to be an independent creator.

When asked where the idea of doing a charity anthology came from, Kneel said “It can be hard when you're first thinking about putting your work out there. Editing, formatting and pushing your work is a scary and thankless task. I, however, have been blessed to have a backroom staff of close and encouraging friends who have always been there for me, doing those dirty jobs that my simple writer's mind still can't grasp... not so for many others and so this is why we started this project. I believe in helping. Supporting and championing my fellow Indies. I believe in giving back. The fact that any profits from this book will go towards supporting a charity close to my heart makes it all the sweeter.”

Kneel Downe’s Stolen Indie anthology goes on sale on Friday, 20th May, which also happens to be Kneel’s birthday. All profits from the sale of this anthology will go to the charity http://www.childrenwithcancer.org.uk/

To get a taste of the wonderful writing that was received, you can read some of the anthology entries, both those that made it into the book and those that did not, for FREE on Kneel’s website at http://www.virulentblurb.com/