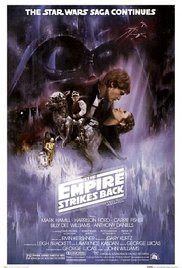 Our small band of Gunters in The DreamCage universe are reviewing every film mentioned in Ernest Cline's Ready Player One. This week David Ames continues the original Star Wars saga with Episode V: The Empire Strikes Back...


We’re back again for the second instalment of my reviews over Star Wars. This week I will look at what is widely considered to be the best of the entire saga: Star Wars: Episode V: The Empire Strikes Back.

As you saw before, I love Star Wars. This film, the second released, is easily my favourite and in my opinion also the best of the entire series. John Williams is back with more amazing music, as are our favourite cast of characters: Luke Skywalker, Princess Leia, Han Solo, Chewbacca, Darth Vader, and the Emperor. One new addition is that of one of the most famous and recognisable characters in the entire universe: Yoda.

We open, as is always the case, with “Long ago in a galaxy far, far away…” followed by the crawl. The text reveals that although the Death Star has been destroyed, Darth Vader and his imperial troops have driven the rebels to the far reaches of space. Also, it is revealed that Vader has become obsessed with finding Luke Skywalker.

The film begins in the ice planet Hoth, with Luke and Han scouting the terrain. After shenanigans with what can only be described as a Jim Henson version of a Yeti, the real action begins. What unfolds next is one of the biggest commercials for toys ever. The AT-ATs, giant snow walker robots, storm a rebel base and are fended off by pilots, including Skywalker, in pretty sweet snow speeders. They are trying to hold off the Empire until a majority of the rebels can escape.

Once in space, Luke remembers a vision he has in which the incorporeal voice of Obi-Wan Kenobi tells him to travel to the Dagobah System and track down Master Yoda who will teach him the ways of the force. Meanwhile, Han and Leia search for refuge with an old friend of Han’s, Lando Calrissian (played by Billy Dee Williams). Little do they know that Darth Vader has sent out bounty hunters, including the ultimately badass looking but somewhat useless Boba Fett, to track down the Millennium Falcon. Vader captures Solo and freezes him in Carbonite to be taken to Jabba the Hut, a gangster on Tattoine, to whom Han owes a large sum of money. Here we get the most romantic exchange ever:

Leia: I love you.

Han is a suave motherfucker, even in the face of death. 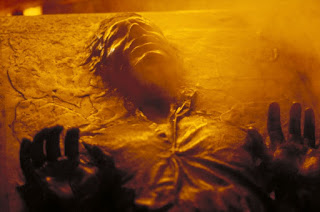 Luke tracks down Yoda (a puppet voiced by the amazing Frank Oz) who, despite what Luke was hoping, is basically a crazy, midget with googly eyes and terrible skin. Evidently any Jedi who hides alone becomes insane and creepy (see Obi-Wan in Episode IV). After much debate, Yoda accepts Luke as his student and begins to train him in the ways of the force. After learning of Han’s capture, Luke strikes out against Yoda’s wishes to save his friends. What happens next is one of the biggest twists in all of film history and also one of the most quoted lines ever as well. I won’t say it because you probably already know.

The film ends with Han prisoner, Luke without one of his hands, and the rebels fractured and separated. Needless to say, this movie is much darker than the first and the effects and acting are better. As whole this movie strikes a completely different chord than A New Hope. Yes it still contains all of the wonder of space and action but it also details the themes of inner demons and the inherent flaws of revisionist history and familial secrets.

This film has less of the ridiculous, other than some of the looks that the Yoda puppet gives Luke. A quote from one of my favourite movies sums up something about these aspects: “You gotta keep the flaws. Crappy effects, real puppets. That's what makes it so good, ya know?"

The Empire Strikes Back shows you what can be done when someone with the scope of George Lucas is given almost free reign to create whatever his heart desires. You are given a masterpiece which could be hung on the wall of Jabba’s palace alongside a carbonite Solo any day.

Yoda’s original name was going to be Buffy.

Stanley Kubrick almost stopped the film from being made by going way over filming on The Shining and using too much studio space.

Carrie Fisher had to stand on a box in a lot of the shots with Harrison Ford because of the height difference. Ford is 6’1” while Fisher is 5’1”.

The “I Know” line was originally supposed to be, “Just remember that Leia, because I’ll be back.” Harrison Ford changed it because he didn’t want to come back for a third film. Lucas had to convince him to star in Return of the Jedi.

Only four people other than Lucas knew about the major twist at the end of the movie.