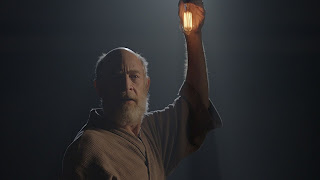 Contrary to the title, Ren Zelen WAS at Raindance 2017 where she watched I'm Not Here...

I’m Not Here is a generation-spanning, character-driven drama, skilfully handled by director Michelle Schumacher and grounded in a virtuoso performance by J.K Simmons.

On the day of his 60th birthday, we meet Steve (J.K. Simmons), alone in his dingy and neglected house. Unpaid bills pile up on the carpet and telephone calls are left for the machine to answer (I’m Not Here’...). Most warn of the imminent cutting off of his utilities.

Surrounded by mementos and scattered knick-knacks, he spends his day wallowing in alcohol and self-pity. The silence is disturbed by a birthday phone call from his mother, who also conveys the news that his long-estranged wife, Karen, has died.

As he reflects on the memories that have brought him to this sorry state, the misfortunes of his past begin to overwhelm him.

The film jumps between three time periods. We are recalled back to Steve’s childhood in the 1960s (child Steve is played by Iain Armitage, about to appear on TV as Young Sheldon). We see how his father (Max Greenfield) has issues with alcohol, and how this inevitably leads to the breakdown of the relationship with his mom (Mandy Moore). These events sow the seeds for Steve’s own struggles and failures. Neither parent is cruel or malevolent, both care for their son, but the shadow of alcoholism and secrecy falls fatefully across the family.

Alongside this we also see Steve as a young man (Sebastian Stan) in the 1980s/90s, and witness how the pain of past experiences shapes his relationship with his young wife, Karen (Maika Monroe) and fuels his own dependence on alcohol, which itself finally leads to tragedy.

I’m Not Here, the second film from writer/director Michelle Schumacher (co-written with Tony Cummings) doesn’t pull any punches when it comes to the depiction of depression and alcoholism.

Whilst most people will be familiar with the flamboyant, bombastic performances J.K Simmons gives in Whiplash and Sam Rami’s Spiderman trilogy; here, a gaunt and bedraggled Simmons shows us a side he doesn’t often display. With no spoken lines and no actual interaction with others, he convincingly and movingly conveys emotion, pathos and despair.

The relatively shorter running time means much of our attention is given to Steve, and Sebastian Stan also acquits himself well in his portrayal of the younger version. However, unsurprisingly, the development of the other characters suffers somewhat. We learn little about other figures such as Steve’s wife Karen, who is portrayed mostly as the conventional girlfriend and then the long-suffering spouse, or best-friend Adam (David Wexler), who is first shown as the other half of a comedy duo with Steve in an unfunny, drunken college skit about Schrödinger’s cat.

I’m Not Here is a film that challenges the viewer with its grim view of the destructive nature of alcoholism and its effect on the important relationships of life. It also presents us with a rather enigmatic conclusion, which perplexingly might be even read as a ‘happy’ ending.

Although the limitations of a small budget may be seen in retrospect, the deft direction, excellent performances and original presentation of the narrative, are strong enough to keep the viewer engaged. Despite its restrictions, I’m Not Here can confidently stand alongside many of the other dramas of 2017 who have the benefit of much bigger budgets.