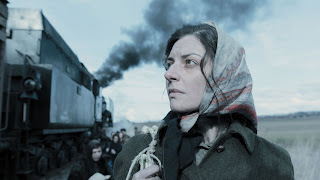 Eternal Winter tells the story – or a part of the story – of the experiences of 700,000 Hungarians who, as World War Two came towards an end, were shipped to Russia to work as slave labour. The Russians – with the tacit approval of Churchill and Roosevelt – saw it as a punishment for Hungary’s support for Germany. This is not a story that is well-known here.

The focus of the story is Irén Walther (Marina Gera), who is taken from her home – and daughter – by Russian soldiers. She is not alone. There are dozens of other women with her. They’re marched out of their town and onto trains and off to the East and into a camp. What follows is a story of survival and the choices one makes to survive.

It makes an interesting sister film to László Nemes’s ‘Son of Saul’, which tells a story of the destruction of Hungary’s Jews [Read Tony's review of that film here - Ed]. It is not as bleak as ‘Son of Saul’. But survival in The Holocaust was purely a matter of luck. Stalin was not setting out to murder the Hungarians, but they had no interest in whether the lived or died. Their only interest was in exploiting them as a workforce. Although as I write that I might be giving more credit to the Stalin’s Russia than it deserves. Perhaps this was meant to be as much of a final solution as The Holocaust was. The film tells us that 300,000 of those deported Hungarians never returned home. Quibbling over whether this is mass murder or genocide seems foolish. The fate of these people is as much of an illustration of the arbitrary terror of totalitarian regimes whether they wrap themselves in a red flag or a swastika.

Marina Gera is brilliant as Irén. She’s the centre of everything and we see how she is changed by what happens to her but despite that she manages to hold onto hope. It reminded me of Viktor Frankl’s ‘Man’s Search for Meaning’ without communicating quite the same message. (I wondered whether to expand this point here and then realised it would make this a longer read than most of you would like. I say read ‘Man’s Search for Meaning’.)

Irén is saved from dying by Rajmund (Sándor Csányi) who teaches her his rules for survival. Their relationship develops over time. It becomes the centre of the film. Csányi is great. Rajmund’s apparently cynical set of rules for survival hides a romantic soul and his love for Irén might be the thing that kills him.

I do not know if this is entirely fair, but my one criticism of the film is that it starts off darkly but, by the end, the camp feels almost dangerously comfortable.

That feels a little odd when one begins, as the influence of films about The Holocaust shouts out at you. Indeed, the whole thing feels so familiar at the beginning: the forced march from home, the cattle trucks, the arbitrary deaths, the camp setting, the work etc. But these images are familiar to us not just because we have seen them in films but because this was what happened to millions of people in real-life. That cycle of forced march, train, camp and arbitrary death at the hands of uncaring – and in same cases deliberately violent and cruel – authority is the history of a huge chunk of Europe. Perhaps Jeremy Hunt might want to watch this before he runs off about how the EU is in any way like the Soviet Union.

Also – and forgive me this little diversion – it made me realise that to the British steam trains have a sort of air of cosy nostalgia. I am not sure whether they have that same air for the peoples of Eastern Europe – ‘The Bloodlands’ of Timothy Snyder’s book – when steam trains carried millions of people to their imprisonment and murder. Thomas The Tank Engine might feel a little less comfortable dragging cattle cars full of the doomed across Sodor.

We lose the feeling of imprisonment as we go, but perhaps that is the point. By the end these people might have given up all hope of getting home and made the best of their lot. That should not divert us from how well-directed and well-told this story is. Nor should it undermine a series of excellent performances – headed up by Gera and Csányi – that give the film an emotional solidity that serves it well.

It would make an interesting double-bill with ‘Son of Saul’, but you’d probably want this to be second on the bill. ‘Son of Saul’ leaves you without much hope, ‘Eternal Winter’ gives it back to you.