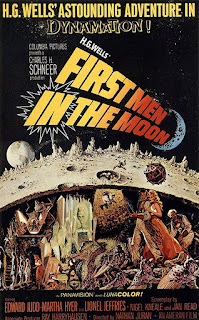 Ian Ham takes on the Selenites and a skeleton with the second (the first was in 1919) film adaptation of H G Wells' novel First Men in the Moon...

As I sat down to write this piece, I realised that it was probably about thirty years since the last time I’d seen it. I’d forgotten, for example, that it started with a “present day” (1964) moon landing finding evidence of a previous expedition and I started worrying that I’d got the wrong film…

As the film played out, it soon became apparent that I’d remembered some things better than others. Ray Harryhausen’s effects never disappoint, and his creations are always a welcome addition to any film. He even manages to squeeze in a brief walking skeleton, so that’s nice. The special effects are pretty good for the day. I vividly remembered the Moon Cow monster being really scary as a kid. I also remembered Lionel Jeffries being brilliant as Cavor. Looking at it now, you can see various influences on Cavor’s character. There is the obvious influence of Nigel Kneale’s Quatermass in there, and the overall tone of the film is somewhere between that, very early Doctor Who, and Star Trek TOS all mixed together. You have a dashing Kirk-like lead in Edward Judd’s Bedford, a dotty inventor in the mould of the aforementioned Professor Q and the good Doctor, and also a young “assistant” in the form of Martha Hyer’s Kate Calendar. And speaking of Doctor Who, it took his entire time on screen for me to realise that Erik Chitty as Gibbs also played Engin in The Deadly Assassin, a Doctor Who story from 1976. Sadly that took all my brain power for a very small geeky fact.

The film really gets into its stride in the second act, when they’ve finally left the Earth in the superbly designed “Sphere”. It’s all Victorian wood panelling, brass fixtures, with shutters covered in the mysterious Cavorite anti-gravity paint. They blast off into space, accidentally taking Kate along with them (so she can stay in the Sphere for no reason during the whole film). They land, and immediately encounter the Moon’s inhabitants, the Selenites, in their underground caves. Obviously the first thing the headstrong Bedford does is kill half a dozen of them, which sets off the relationship nicely. Various corridor-based shenanigans ensue, and eventually some of our heroes escape in the Sphere and return to Earth.

In my head, this was a jolly B movie caper that my brother and I were equally enthralled by and scared of on a Saturday morning. As I watch it as an adult, I can’t believe the bleakness and hopelessness of the fate of some of the characters. Firstly Cavor stays on the Moon on his own to further study the aliens. It has already been established that the elderly Bedford is regarded as a delusional lonely madman. And then it transpires than when the “modern day” moon landings discover that all life has been wiped out on the moon. And to add insult to injury it appears that it was all the fault of Cavor’s snotty handkerchief. This fact is mentioned only in passing right at the end which seems a trifle callous for a Saturday morning children’s film.

So our three heroes fates include Bedford's lonely madness, Kate’s death at some point prior to 1964, and Cavor’s probable end in a cold dark cave on the moon, covered in snot. Even the Moon Cow is randomly killed by the Selenites (who have a pretty nifty line in ray guns considering they are a peaceful race).

I’m sure it was jollier film when I was a child!