Book - A Shroud of Leaves 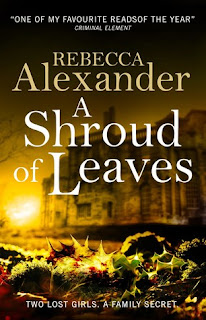 Always searching for a new crime novel to read, Steve Taylor-Bryant uncovers A Shroud of Leaves by Rebecca Alexander, thanks to Titan Books...

Archaeologist Sage Westfield has her first forensics case: investigating the murder of a teenage girl. Hidden by holly leaves, the girl’s body has been discovered on the grounds of a stately home, where another teenage girl went missing twenty years ago - but her body was never found. With mysterious links between the two disappearances, the police suspect the reclusive owner, Alistair Chorleigh, who was questioned twenty years ago but never charged. But when Sage investigates a nearby burial mound - and uncovers rumours of an ancient curse - she discovers the story of Edwin Masters, his friend Peter Chorleigh, and an excavation over a hundred years ago, that also ended in a mysterious disappearance. Still recovering from the traumatic events of her recent past, Sage will need both her modern forensics skills and her historical archaeological knowledge to unearth the devastating truth.

I do love a great crime story, and ones with multiple plots if done well are often the stand outs. In A Shroud of Leaves author Rebecca Alexander has a modern day story, that of the girl recently killed and buried in the titular shroud, the disappearance and suspected killing of another teenage girl twenty years previously which has ties to today's suspects, and the strange disappearance of a young archaeology student over a century before. All three strands are well plotted and have their chance to shine but Alexander links the three together incredibly well, even when you think a resolution is just out of grasp. The stories are investigated by Sage Westfield, who is not law enforcement but is, in fact, an archaeologist who, after her first adventure [read Susan's review of A Baby's Bones here], decides she may want to use her skills in a forensics capacity.

I had not read the first book but found that this does not matter as you can jump straight in to Shroud without the prior knowledge. Sage is a character I bought into immediately, I found her compelling, struggling with that balance between what is right for her young family and what her career will entail. The way she investigates and manages to build answers from not very much I found different to a usual police based thriller and the way she thought, despite being smarter than I am, was a lot more enjoyable for me the reader.

The modern parts are well written, plotted incredibly well and move at a pace in keeping with the action on the page, but the century old story is in a much different style mainly narrated in the first person by Edwin Masters, or pages from his journal, and written in an older style more reminiscent of the style pre World War One. The contrast between the two styles is what sets this book apart from other multi timeline novels as it is done so well you genuinely feel transported between the eras, you find yourself as invested in Edwin as you do the unfortunate victim in the present, and Alexander does an extraordinary job of tying together all the various strings and making the reader jump to her tune.

I said earlier I had not read the first Sage Westfield novel, this is my first experience of a Rebecca Alexander novel, it will not be my last. Alexander has a fantastic grasp of what a reader wants and yet still surpasses all expectations. A real contender for my book of the year.