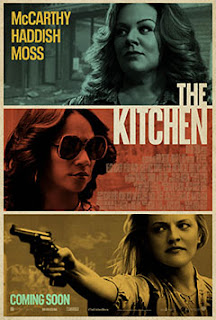 Something's cooking in The Kitchen. Watch the trailer for the new film from Warner Bros and DC which opens in the US on Friday (UK next month)...

Now they own the neighborhood.

The gritty, female-driven mob drama The Kitchen, from New Line Cinema and BRON Creative, is written and directed by Andrea Berloff, who was nominated for an Oscar for Original Screenplay for Straight Outta Compton. Berloff’s screenplay was based on the comic book series created for DC Vertigo by Ollie Masters and Ming Doyle.

New Line Cinema presents, in Association with BRON Creative, a Michael De Luca Production, “The Kitchen.” Set for release in the US on August 9th, 2019, the film comes to the UK on September 20th.