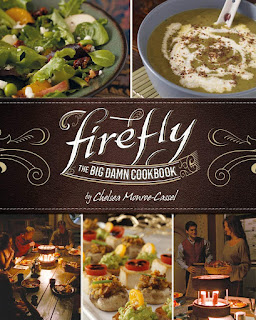 Susan Omand puts an apron on over her browncoat and tackles Firefly: The Big Damn Cookbook by Chelsea Monroe-Cassel, published tomorrow by Titan Books...

Me, flipping pages: Damn, no scones recipes. How am I going to sell another recipe book review to the bossman?

Also me, having just discovered the drinks recipes: Gin cocktails!!!

So, thanks to the power of a Gunpowder Gimlet, and with ginger cake as a back-up bribe, I get to review another lovely TV tie-in cookbook from Titan Books. This time, the subject is Firefly and, as always, Titan don’t disappoint with their presentation. The recipes themselves are beautifully photographed and very clearly written out, telling you both how difficult they are to do and whether they are suitable for particular dietary requirements such a gluten free, vegetarian and vegan. But this is more than just a recipe book, it’s a Firefly recipe book and Chelsea Monroe-Cassel has really managed to capture the voices and the essence of the Serenity crew by pairing the recipes with comments from specific members of the team that are fitting of their character and everyone is represented. For instance, Inara offers recipes such as Spiced Lamb or Shimmerwine, whilst Book talks about street food and mulled wine, Wash concentrates on the comfort factor of homemade soup and bread pudding and Jayne just came up with sausage rolls on a stick. There’s even recipes cut out of the Blue Sun Corporation’s magazine! The book introduction itself is left to Kaylee though, who talks about the types of food available in the ‘Verse and makes suggestions for menu planning for various Shindigs that you may have to cater for.

So much for the Firefly-ness, what of the food? There’s a definite bent towards Asian tastes and ingredients, as you might expect since it’s a Firefly tie-in, but it doesn’t just stick to the usual fare that you can get from your local takeaway. Being an American book, you do need to be able to convert Cups and Fahrenheit measures into metric but there’s a very handy chart at the back of the book to help with that. It was also good to see that it converted into imperial (lbs and oz) and supplied equivalent gas marks for the temperatures for those of us that still have a gas oven (and haven’t stuck our heads in it yet). Also being an American cookery book there are some ingredients that may be more difficult to obtain from your local Tescos, or just called something else, but the interweb is a wonderful place and you can soon get your oven mitts on garbanzo beans, lotus root and matcha powder if you so desire. Although I haven’t been able to work out what “Grits” actually is yet.

So, don’t let any of that Americanisation put you off because there are some wonderful recipes here, often combining things you wouldn’t expect – like stirring sesame oil through mashed potato, I’ve tried it now and it’s a lovely nutty taste. There’s nicely different basic recipes at the start of the book, like how to make sweet chilli sauce or mix Bao dough for steamed dumplings. The rest of the book contains recipes for all occasions split into four different areas – Shipboard living, Border and beyond, Core World Upper Crust and Core World Underbelly – and they cover every kind of edible from savoury and sweet meals, to snacks, bakes and even cocktails. One thing it may have benefitted from as a recipe book is an index that lists main ingredients so that, say you have some beef mince, you know what you could try to make with it. But that is really me nitpicking a lot.

We have been lucky enough, thanks to Titan Books, to be allowed to exclusively share THREE recipes with you from the book too [The pictures should expand enough to read - Ed] so you can try before you buy, like I did with these: 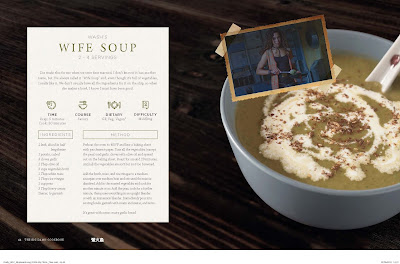 No, you’re not going to be cooking your spouse. This is a creamy leek, pea and potato soup with added richness, due to the veggies being roasted first, and a real zing from a spoon of rice vinegar to cut the creaminess. The zaatar mentioned in the recipe is just a spice mix (cumin, sesame, oregano and sumac) but I didn’t have any, so I substituted a sprinkle of smoked paprika and it tasted lovely. 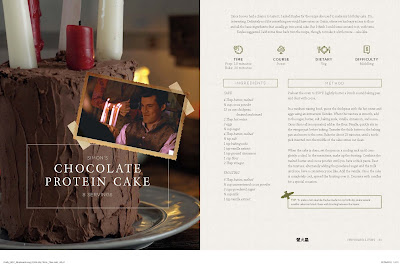 Chickpeas? In chocolate cake?? I know, I said the same thing, but it works really well (the immersion blender mentioned in the recipe btw means just one of these stick blender things that you use straight in the bowl rather than transferring everything to a food processor). The cake comes out a little denser than a normal sponge, as you’d expect, but it is wonderfully rich and moist, chocolatey but not overly sweet. 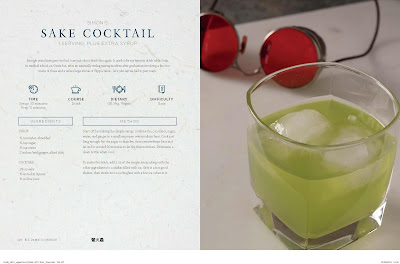 Oh what. You couldn’t expect me to review a recipe book that has cocktails in without at least trying one of them could you? Even though I couldn’t get a copy of the gin cocktail I mentioned at the start (which you DO need to try) this sake one is really nice. The cucumber and ginger syrup is an acquired taste but I love it and I would happily drink it as a cordial, diluted with soda or tonic (and gin/vodka of course,) but with the sake and lime it really comes into its own to give a drink that it both fresh and warming. One thing I did differently though was to miss out the melon liqueur. My bottle of Midori is probably old enough that it can now drink itself (I find it far too sweet) so I subbed in some triple sec for “the kick without the ick.” Also I have discovered that sake is one of these drinks that doesn’t tell you you’ve had enough til you hit fresh air. Just so you know…

Anyway. If you or your friends are Firefly fans or foodies, this is definitely a book that needs to go on your gifting wishlist. Good and usable recipes, fun tie-in commentary and absolutely wonderful photographs mean it is a book that anyone would be pleased to receive - It will soon be that time of year again after all.

All recipes taken from Firefly: The Big Damn Cookbook by Chelsea Monroe-Cassel, published by Titan Books.