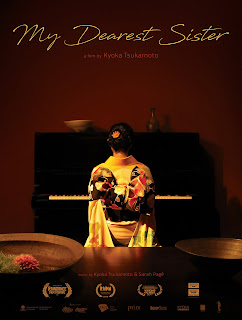 On today at Raindance, Tony Cross heads east to watch My Dearest Sister...

My Dearest Sister is the story of filmmaker, Kyoko Tsukamoto’s attempts to reconnect with her sister, a potter living in Fukushima. Tsukamoto left Japan to – and apologies for the cliché – follow her dream. Her sister stayed and married a controlling Japanese man. Often, in these stories, we only hear one side of the story, but Tsukamoto does occasionally give her sister the chance to put her view – or puts her sister’s view across herself in the narration.

Tsukamoto remembers a difficult childhood. Bought up – in her version – by a cold-hearted, traditionalist mother and a ‘genius’ artist father with a possibly perverse predilection for inappropriate behaviour, which her mother seems to condone. Her sister remembers it similarly but differently. It wasn’t all bad, she says, and why can’t you remember the good things? Tsukamoto talks about inappropriate behaviour from her Uncle too, a respected Doctor. Her mother seems to dismiss that too as just ‘normal’.

Tsukamoto seems to have become cynical and judgemental as a result, but the film tells a story of her changing as she looks to form a closer relationship with her sister. It’s not all butterflies and roses though. There’s some real meat to this. One conversation between Tsukamoto and her sister late in the film is particularly hard, especially as the Japanese – like the English – try hard to suppress their emotions. So, tears, when they come have more impact.

This is something I have noticed recently. I have come to appreciate less is more when it comes to emotions. I’m not saying there should never be any total loss of control in acting, but sometimes watching someone trying to hold themselves together when everything is falling apart is more upsetting for me: that barely perceptible wobbling lip, the swallow as one tries to keep back a sob or the single tear drop.

The film also addresses, without making it a lecture, how Japan has become the country of the Samurai and the Geisha. That it is and always has been a patriarchy. But Tsukamoto’s fascination with an ancient Japanese queen, Himiko demonstrates that Japan wasn’t always like that. That once there was a more spiritual culture led by women.* Her mother’s coldness and her sister’s marriage seem connected to that patriarchal myth, but her sister sees her husband’s controlling instincts as a positive. As a sign that she is needed and loved.

It also walks a boundary between documentary and fiction. I’m not sure if Tsukamoto’s sister is played by an actress or is her sister. There’s a telephone conversation between Tsukamoto and her mother at one point, which again appears to be an actress. But Tsukamoto is playing herself. So, how much of this is true? How much of it is just one side of a story?

Throughout there seems to be an underlying battle between East and West, but also perhaps an idea of how the two can mingle together for the best. For example, Tsukamoto talks about how she took up karate in her new home and that it took being far away from home for her to be comfortable learning Japanese traditions.

It’s also interesting that Fukushima, location of a terrible nuclear disaster following a tsunami, is where her sister lives. It reinforces the idea of lies and illusion at the heart of modern Japan. I think that’s not just hinted at but stated implicitly.

I feel I am waffling. I think if you go and see this film in the right mood – which probably means the wrong mood from a happiness sense – it might give you some hints at how to handle those issues, although I can’t guarantee that. Having lived a mostly happy life I sometimes find myself wondering why I have any anxieties at all, but that seems to be the fate of most human beings. Most people seem to have ghosts they are haunted by.

It also looks and sounds beautiful. The music, co-composed by Tsukamoto and Sarah Pagé, is wonderful. And some of the images are astonishing so this is worth seeing on a big screen in a proper cinema.

If it has any moral then I’d suggest it was, and I quote, “Nothing is a failure until you stop working on it.” It’s only just over an hour long too so you can afford to ‘waste’ that much of your life.


* How much of this history is true or not I can’t say. Japanese history is – mostly – a closed book to me. Despite my fascination with the country. It’s on my ‘Learn More About This You Western Focused Fool’ List. A list that sadly reveals the holes in the 1980s and 1990s British education system more profoundly than anything except the mess we currently find ourselves in political. Propaganda disguised as history does not make for a properly informed country. A similar claim may be made for Japan and its refusal to face up to what was done in its name during World War Two. But I digress.