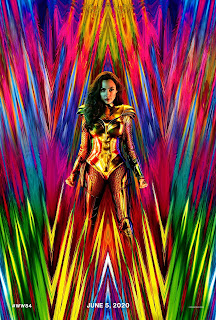 In honour of Wonder Woman Day, Warner Bros. Pictures have announced that the first trailer for Wonder Woman 1984 will close the showcase at this year’s CCXP, in São Paulo, Brazil on Sunday, December 8th AND it will be live-streamed on Twitter...

The Thunder Hall presentation will feature several firsts, including the film’s star, Gal Gadot, and director, Patty Jenkins, on hand to introduce the first-ever trailer for their upcoming film, due in theaters next June. And for the first time in the history of CCXP, the showcase will be livestreamed on Twitter, connecting the talent and the 3500 fans inside the venue to Wonder Woman fans around the world in real time. What’s more, those in the room will be able to see tweets from around the world as they cascade live down a giant screen on the stage. The panel will also feature a Q&A and other big surprises as well.

To follow the event live: @WonderWomanFilm will host the livestream, with Twitter handles from across the globe sharing as well. Fans will have the opportunity to sign up for Wonder Woman updates via @TwitterMovies as well.

Fast forward to the 1980s as Wonder Woman’s next big screen adventure finds her facing all-new foes. Director Patty Jenkins’ “Wonder Woman 1984” stars Gal Gadot in the title role, alongside Chris Pine as Steve Trevor, Kristen Wiig as The Cheetah, Pedro Pascal as Max Lord, Robin Wright as Antiope and Connie Nielsen as Hippolyta. Jenkins directs from a screenplay she wrote with Geoff Johns and Dave Callaham, story by Jenkins and Johns.