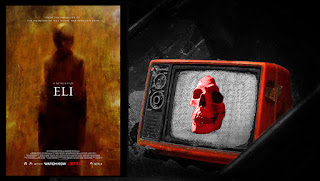 We love Halloween here at The DreamCage and we love the countdown to it even more as, every day in October, David Ames opens a window (well, writes an article) in his Hallow-vent Calendar of horror films. His choice for Day 23 of Hallow-vent is Eli... 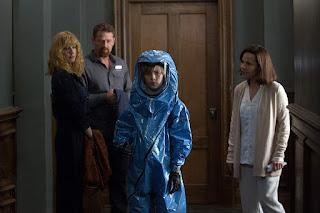 When I was looking over my list of films that I still needed to watch, I did a quick count and realized I was a few short. Because of this, I went through Netflix and realized that a few new movies had been added since I first compiled my movie list for this year. The first, and most heavily advertised, was today’s film, a haunted house horror film with a medical edge. The premise sounded interesting enough, and the trailer looked decent, so I strapped in and settled down to watch this film: 2019’s Eli.

Eli is a young boy, who early in his adolescence, has developed a rare disease which causes him to have an insanely adverse reaction to anything in the outside world. Because of this issue, if Eli is exposed to the world, his skin basically begins to boil and burn in a horrifically painful way. After numerous attempts to help with his sickness, Eli’s parents, Rose and Paul, sign on for a very expensive and very experimental gene therapy treatment with the well-known Dr. Isabella Horn.

When the family first arrives, they enter a massive Victorian style mansion which has been sealed airtight and equipped with airlocks so that Eli, and the previously cured patients at the facility, are able to interact with their environment and their parents without the need of a plastic bubble. At first, it is wonderful to be free, but very quickly Eli realizes that something is strange about the house. He sees strange images, possibly an apparition, but can’t be sure of anything. His window even fogs up of its own accord and finger marks appear. No one believes Eli, and they attribute his vision to hallucinations brought on by his medication.

Things progressively get worse as Eli’s treatments begin. The technique is very painful for Eli, and while he suffers through this, the paranormal happenings increase. No one in the facility seem to believe him, but a young girl who lives down the road befriends Eli through an outer window. She tells Eli that the other patients also complained of ghosts, and that the place gives her the creeps. Eli becomes increasingly distant with his family and the doctors, all while beginning to believe that they are actually making him worse and, in the end, are trying to kill him. The ghosts seem to have their very own agenda and it is one that will shake Eli to his core.

This film had such promise. It is shot beautifully, all while maintaining what I have to believe is a relatively low budget, considering the minimal sets and special effects. Sadly, this movie starts out strong and flounders about 75% of the way through. What begins as a somewhat engrossing story devolves into a ridiculous premise that holds no weight for the film.

As performances go, all are solid, even after the ridiculousness starts. Kelly Reilly and Max Martini play the parts of the worried parents well, although Martini comes across as unnecessarily domineering in many parts (I guess that gets explained with the reveal at the end?). Reilly, however, does a wonderful job playing the worried parent who is lost and afraid, and worries about the fate of her dying son.

Lili Taylor was one of the reasons that I wanted to watch this film in the first place. I love her in almost everything and I was hoping that joy would cross over. She plays the doctor rather well, and elicits the perfect amount of care and authority to be believable. Also, as the film points the finger in certain directions, she appears more and more underhanded. The premise at the end hinges on her performance and, honestly, her talent is wasted in the ludicrous ending.

Charlie Shotwell is surprisingly great as Eli. He is afraid, he is worried, he is sick, and all of these things shine through in his performance. He is perfect for the role and what he does at the end is really they only palatable part of the ending.

Overall, this film just falls flat. I am happy that it was on Netflix because if I had paid to see this in the theater, I would have been just as pissed as I was at The Last Exorcism. In fact, the film follows that same timeline. It begins with a great premise. It continues to build in a great, somewhat unsettling way (although this film is far more polished), and then it takes a dive off a cliff into the realm of stupidity which is hard for the film to survive. It isn’t a terrible movie, but it is an absolutely awful ending, which sullies what could have been a half-decent horror film.