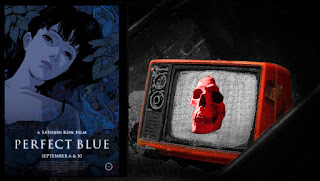 We love Halloween here at The DreamCage and we love the countdown to it even more as, every day in October, David Ames opens a window (well, writes an article) in his Hallow-vent Calendar of horror films. His choice for Day 22 of Hallow-vent is Perfect Blue... 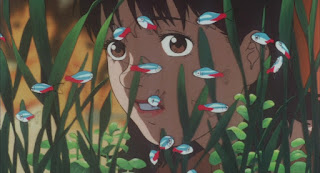 There are certain pieces of art that just stick with you, whether that is for emotional reasons, guttural reactions, or haunting memories. Today’s film falls into all three of those categories. I remember watching this when I was 13 years old, honestly probably too young, and there are scenes that to this day still unnerve me. Also, if you have seen Requiem for a Dream or Black Swan you will recognize some scenes in this film, as Darren Aronofsky bought the film rights in order to recreate certain scenes for those movies. Today we look at the psychological thriller/horror movie Perfect Blue.

This film follows the career of Japanese Pop Idol Mimi. After becoming famous with her group Cham!, Mimi decides she wants a more serious career and leaves, perusing acting instead. This infuriates her fans, including Uchida, a severely deranged stalker who goes by the name Me-Mania. Even though this is happening, Mimi continues to strive for her acting, eventually landing a role on the television show Double Blind. When she strives for a larger part, it is granted, although the new role is as a rape victim.

While Mimi is excited for her new role, her manager Rumi warns her that Pop Idols have specific reputations and if she takes this role, it could severely damage or ruin her public image. Mimi doesn’t care and continues to push toward her new career. Meanwhile, she receives a strange fax calling her a traitor, and she discovers a strange website called Mimi’s Room, which contains daily diary updates. Mimi worries about who is impersonating her but her manager tells her to just ignore it as she has so many fans.

Mimi’s role begins to take a toll on her mental state, and as she slowly loses grip with reality, people who have been “ruining” her reputation have begun to show up dead. With the increase of death surrounding her and her own fledging mental health, Mimi becomes the prime target.

There is so much more to the film than what I am describing but I want people to go into this film as blind as possible. There are twists and turns that catch you off guard and even after seeing it ten or fifteen times, I still catch new things each time.

I can’t speak too much to the performances because the actors are animated, but I can say that the entire voice cast does a wonderful job. The tension and fear that Mimi experiences is very convincing, a feat that is sometimes hard to achieve in animation. Speaking of which, the animation style is great. It isn’t the classic anime art style, instead resembling more of what you see in films like Akira or Ghost in the Shell. That authentic look helps to keep the film grounded and makes us take more stock in each of the characters on screen.

This film has so much to say, not just about a stalker and some weird, mental breakdown of the main character. It also speaks to the identity and struggles of a woman trying to break out and be her own, independent person. It is so much deeper than just the thrills that come from the work. In the end, instead of just thinking about what happened, you want to try and wash it away, hopefully with scalding hot water; anything to make you feel clean again.

There isn’t much more I can say about this film, except that if you are a fan of Black Swan, you NEED to see this movie. There is so much that Aronofsky lifted from Perfect Blue, and although it really works in Black Swan, the original is far superior. This film creates panic and worry in the viewer unlike most other films of the same genre, and as psychological thrillers go, this one would easily be in my top 3. Do yourself a favor, if you can, and track down a copy today. You won’t be disappointed.