Hallow-vent - Day 20: I Am The Pretty Thing That Lives In The House 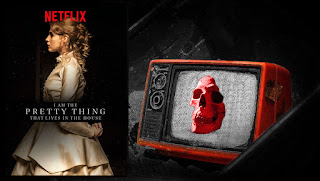 We love Halloween here at The DreamCage and we love the countdown to it even more as, every day in October, David Ames opens a window (well, writes an article) in his Hallow-vent Calendar of horror films. His choice for Day 20 of Hallow-vent is I Am the Pretty Thing that Lives in the House... 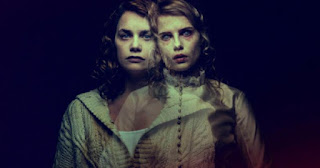 We are back again with yet another haunted house film. This is the first Netflix horror film I ever saw advertised, and I added it to my queue almost immediately, but then I never watched it. It was released in 2016 and for the past three years it has sat on my watch list. Tonight I decided to remedy that. I was so happy with The Blackcoat’s Daughter that I wanted to give the director, Osgood Perkins, another look, with his first movie: 2016’s I am the Pretty Thing that Lives in the House.

The film begins with a haunting monologue discussing aspects of life and death. The disembodied voice tells us that once a house has suffered a death, it can no longer be sold to someone living—it can only be borrowed from the ghosts of that house. Then, as the camera sharpens focus, we are introduced to Lily, a hospice nurse, who has been hired to care for Iris Blum, an aging horror author with dementia.

Lily moves into the residence, and after the first day is over, she goes downstairs to call friends of hers. As she is talking, the phone is ripped out of her hand. As she retrieves the phone, a white shadowy figure is seen receding into the darkness, but Lily is unaware of the presence. As time wears on, a mold stain develops on the wall and seems to be getting worse. Lily continues to care for Mrs. Blum, but strange things continue to occur in the home. Also, Mrs. Blum continuously calls Lily by the name Polly, although Lily just justifies this with Iris’ dementia.

About a year after Lily first starts in the home, the executor of Mrs. Blum’s estate, Mr. Waxcap, appears and begins to discuss the worsening mold stain. He and Lily attempt to explain away the stain by referencing the pipes behind that wall, and he leaves while claiming that she will only need to stay perhaps another year. As the strange events continue to happen, Lily becomes more and more aware of the presence in the home. While this storyline is happening, the monologue passes the point of view to that of a young woman named Polly, who was murdered by her husband in the home.

I don’t want to give anymore away, although simply telling you about the haunted house aspect of the film does that already. I really enjoyed elements of this movie. It is incredibly slow, but in a way that is still enjoyable to watch. The terror builds slowly, and the film winds up feeling very vintage. The production is sparse but beautiful. The scenes are all lit well and shot wonderfully, with a lot of slow pans and methodical zooms, both in and out. Perkins’ use of camera is a great addition to the storytelling.

Elvis Perkins, brother of the director, provides a gloriously sparse score. Most of the film is ambient noise with just a hint of strings or other instruments, but because of the film itself, the music is a perfect accompaniment. There are also musical portions that sound very much like Psycho and are just as effective.

While Paula Prentiss and Bob Balaban are both good in their roles, the real star is most certainly Ruth Wilson. She perfectly portrays the very scared and on edge Lily. The naiveté and subtle abandonment she experiences throughout the film both owe themselves to her wonderful performance. Also, her soft spoken nature is key to the very quiet atmosphere established, and when she begins to scream, it is much more jarring.

Lucy Boynton appears, for the third time in this list, and is once again rather perfect for her role. She doesn’t really do anything at all, other than float into or out of frame, but her small portion of monologue is well delivered, and her single fully “live” scene is a great short sequence that helps to establish why she is trapped in the home. Her beauty is very ethereal, and she seems to fit period pieces exceptionally well.

Once again, let me just say that I truly enjoyed this film. I think that in The Blackcoat’s Daughter Perkins was able to remedy some of the issues that are present in this film. There is a lot of dead space and dead air, all of which eventually adds up for the viewer. It is entertaining but at certain points, the film feels less slow-burn and more snail’s pace. Also, while I absolutely loved the monologue, I can see why some people have called it pretentious. Still, if you are a fan of haunted house films and books, this movie is for you.

It feels incredibly literary, which I know is a strange way to describe a film. It just seems to work. I felt like I was watching an adaptation of an Edgar Allan Poe short story. While it is modern, this movie establishes and epitomizes the atmosphere of a gothic horror novel. And that, even in the face of a less than stellar story is this films true strongpoint: the atmosphere is palpable and electrified with tension. For the mood alone, this film deserves to be watched.