Bests of the Decade - Gaming 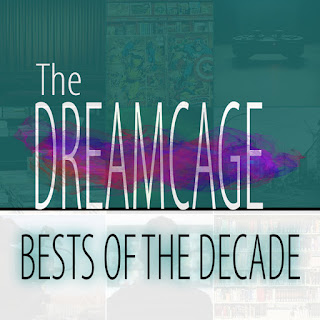 Because we reckon you’ll not have had enough of voting for things yet, every day between now and Christmas Eve we’re giving you the chance to vote for The DreamCage Bests of the Decade. Today’s category is Gaming...


Gaming in the last 10 years? Where to even start?! It has evolved in so many different ways to become one of the biggest industries on the planet. The amount of money now being spent on gaming, both by developers and consumers, means that big game franchises are attracting huge Hollywood interest. Not only is it taking concepts and storyboards from games onto the our screens in the form of films and TV shows, we’re also getting A list actors involved in voicing (and in some cases acting using motion capture) characters in the games that we play.

As far as the types of games we’ve been playing over the last 10 years, the big trend has to be Battle Royale games and the one that springs to mind in this case is Fortnite [and not just because of the dancing - Ed]. However, it didn’t invent the genre. Indeed, it came out as a totally different style of game, where teams of players battled against AI zombie bots, and didn’t pick up on the Battle Royale, survival games with a last man standing gameplay, style of gaming until other franchises started doing it. However, when the makers of Fortnite made that change, boy did they make it their own.

Another big thing, this time on the indie gaming front, that has come through in the last 10 years is the rise and rise of online crowdfunding as a way to get ideas off the drawingboard and actually into our hands. Nowhere has this been more successful than with Star Citizen, a multiplayer space trading game. This is a game that has been crowdfunding on Kickstarter for over EIGHT YEARS, with people investing huge amounts of money in it, to buy ships and characters for a game that may, MAY be released as a playable game by summer next year. However, the developers have been saying that since 2014 and, since then, the concept has expanded exponentially, with the crowdfunder currently sitting at over $250,000,000 raised by 2.4 million backers as of this month.

Talking of indie games, there’s been a real trend towards actively encouraging modding in games. This is when people other than the original developers can change aspects of a game, making maps for openworld play, adding skins to characters and generally enhancing how a game looks or behaves. This trend started way back, with the likes of Doom and Civ, but has really come into its own in recent years, with official recognition of the importance of modding in extending the playable life of a game, and many games are now being added to places like the Steam Workshop to allow for open source creativity.

The other real biggie on the gaming front has been the rise of gaming as a spectator sport. The increase in the use of YouTube by gamers, with things like Let’s Play videos and live-streams, mean that there are vast audiences watching videos of other people playing games, rather than playing games themselves. This has also led to the increase in acceptability of gaming as a career; in fact, just last week there was an announcement that a University in America was granting full scholarships to e-Sports stars, exactly the same as they do for American Football or Baseball. So all those hours honing your skills are not wasted at all!

As for the best games of the 2010s? There’s so many to choose from. Sports-wise, both FIFA and Football Manager are huge everywhere (except in America where they don’t have proper football but have Madden instead). Open world games and games that tell a story have become staples, with names like Elder Scrolls V Skyrim allowing plot driven games but without the constriction of a linear story. Building and logistics games also became popular in indie gaming because playability was more important than the graphics. Yes, I’m talking about Minecraft, but also games like Factorio, Prison Architect and Rimworld. At the other end of the spectrum (no pun intended) straightforward mobile games that could be played on your phone became a big thing. Remember the simplicity and addictiveness of Angry Birds? It ended up spawning a series of games, cartoons, films and even theme park rides.

Looking into the future, I know VR is the watchword of “future gaming” but, as yet, it hasn’t really managed to capture the interest of the playing public with a big title. Console-wise, the Playstation 5 has been recently announced and the Xbox Series X just got announced yesterday. However, it’s likely that these will be the last of their generation as the move is made away from individual consoles with powerful processors and local storage towards what are basically dumb terminals, small boxes just with controller connections which are constantly connected to the internet. But one thing is for certain, gaming and the money to be made from it, is not going away any time soon.

Here are our four nominations, in no particular order. Bear in mind that we couldn’t watch/read/play everything that came out in the last ten years, so your own personal favourites may not be here, but these are some of ours…

The Last of Us

"Twenty years after a pandemic has radically changed known civilisation, infected humans run wild and survivors are killing each other for food, weapons--whatever they can get their hands on. Joel, a violent survivor, is hired to smuggle a 14 year-old girl, Ellie, out of an oppressive military quarantine zone, but what starts as a small job soon transforms into a brutal journey across the U.S."

"When eight friends become trapped on a remote mountain getaway gone wrong, things quickly turn sinister and they start to suspect they aren’t alone. Gripped by fear and with tensions in the group running high, you’ll be forced to make snap decisions that could mean life or death for everyone involved. Every choice you make while playing as each of the eight friends – even the seemingly trivial ones – will carve out your own unique story. With spine-tingling performances from a talented cast of Hollywood actors, including Hayden Panettiere (Heroes, Nashville) and Rami Malek, Until Dawn delivers credible performances that forge an emotional bond with players."

"As the sole survivor of Vault 111, you enter a world destroyed by nuclear war. Every second is a fight for survival, and every choice is yours. Only you can rebuild and determine the fate of the Wasteland. Welcome home."

"A new Jedi story begins. As a former padawan on the run from the Empire, you must complete your training before Imperial Inquisitor discover your plan to revive the Jedi order. Aided by a former Jedi Knight, a cantankerous pilot, and a fearless droid, you must escape the evil machinations of the Empire in a story-driven adventure. Explore and overcome a wide range of challenges focused on combat, exploration, and puzzle-solving."

So, which will it be? There are polls running today on our Twitter page for you to vote for your favourite from the final four listed above (no prizes, it’s just for fun). Also, the polls will change every day so be quick if you want to vote in this one! The winners, as decided by you, of all nine categories will be listed on The DreamCage website in a special article on Christmas Eve when we announce The DreamCage Bests of the Decade!

Here's today's POLL to find The DreamCage BEST of the DECADE GAME! Which of the following PlayStation games was your favourite?
— The DreamCage (@TheDreamCage) December 14, 2019