CLASSIC DOCTOR WHO ON BRITBOX – Inferno 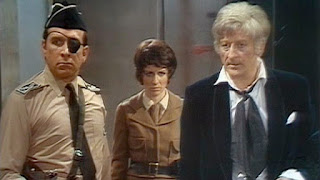 On 26th December 2019, 627 pieces of Classic Doctor Who content were made available to Britbox subscribers. Every Sunday in 2020, our Doctor Who expert, Tony Cross, looks back at some of the classic stories. Here is the Third Doctor adventure Inferno...

Inferno is the final story of Season 7. It's another seven part story, but never really drags. There's a real tension throughout, especially as we get to see the Doctor fail and the world destroyed thanks to the miracle of alternative universes. It's a strong story, which ends a strong season. Possibly one of Doctor Who's strongest seasons full stop.

We find ourselves at a drilling project, which is led by Professor Stahlman (Olaf Pooley). Its objective is to crack through the Earth's crust. This will turn out to be a bad idea but you already knew that didn't you? Stahlman will turn out to be a double-Doctor Who trope: the scientist to whom the ends justify the means & a leader who is too highly strung for his own good. HR in the Doctor Who universe is clearly a discipline lacking in expertise, especially in the military and scientific community.

We discover why this is bad when engineer Slocum (Walter Randall) encounters some green slime leaking from one of the pipes. He makes the mistake of touching it and from that point onwards it is all downhill to the transformation of Slocum from human to Primord.

Alas, the Primords are the classic poorly rendered Doctor Who monster. They look like slightly too cuddly Wolfmen. Or shaggy dogs. Depending on your point of view. We mostly don't see their transformation, which is probably a good thing as the transformation of Platoon Under-Leader Benton (John Levene) is a little silent movie for a 20th-century television series. Personally, I find these things easy to ignore. The sense of tension that surrounds them drives home their danger but they are the sort of thing that some people find distracting.

UNIT are providing the security for the project so the Doctor has taken the opportunity to tap its nuclear power source to work on the TARDIS console. The Doctor and Stahlman clearly do not get on. During one of his experiments with the console, the Doctor finds himself torn out of his reality and into an alternative universe.

This is one of the strongest parts of the programme. All our heroes - apart from the Doctor himself - are now part of a fascist Republic. The Brigadier is now Brigade-Leader complete with eye-patch. In this universe, the Brigade-Leader has none of the Brigadier's twinkle and isn't far off just being a bully. It's a fine performance from Courtney but the same applies to Caroline John whose alt-Liz Shaw is brilliant. And John Levene turns Benton into a thug. They are all different people but another character, Greg Sutton (Derek Newark), isn't too different to his normal Earth character. He's a drilling expert in both brought in, much to Stahlman's disappointment and annoyance.

In the alternative universe, the drilling is ahead of ours. So, despite the best attempts of the Doctor penetration of the Earth's crust takes place and the world comes to a terrible end but in that ending, we get to see our favourite characters, even in alt-form, die (or about to die.) This is the Doctor failing. It's something he'll carry with him going forward, especially as he escapes. Thanks to help from Liz, Greg, Petra Williams (Sheila Dunn) and - for more selfish reasons - the Brigade-Leader the Doctor finds himself back in our Universe.

By this point, Stahlman has started his transformation into a Primord but remains determined to finish his project. He tries to stop Sir Keith Gold (Christopher Benjamin) from reporting the problems to the authorities by having him killed. Something he achieves in the alt-world. The Doctor's return though puts a spanner in the works. He's seen the world's destruction and won't let it happen again. This is the Doctor at his most ruthless and Pertwee really sells it. He's going to save the world even if the world doesn't want to be saved.

Stahlman has turned into a full Primord by this point but the Doctor and Greg take him down with fire extinguishers*and stop the drilling. Sir Keith promises to have the shaft filled in. And things all end happily. If you forget the total destruction of an Earth. Probably.

Inferno is such a strong story. It's packed full of excellent performances from Pertwee downwards. It manages to keep its coherence even though health issues affected Douglas Camfield and he ended up in the hospital. Barry Letts finished the filming and actually I think he does a fantastic job of showing the end of the world via heat. It takes advantage of the alt-universe to allow us to see what would happen if the Doctor fails, which adds tension to the final episode in the 'normal' Earth.

The regulars get a chance to play a darker version of their existing characters and demonstrate their acting chops accordingly. John Levene, in particular, seems to revel in being Platoon Under-Leader Benton. But the rest of the cast do a fine job too, including Newark and Dunn as the nearest thing to a romantic subplot Season Seven has had. Olaf Pooley does twisted scientific bully well. Christopher Benjamin is his usual excellent self in a not particularly over-written part.

This will turn out to be Liz Shaw's last story and Caroline John gets to be superb in it. But Liz Shaw has been a little wasted as a companion, but that's not John's fault. It is the fault of writers that didn't know how to use her properly.

Pertwee finishes his first season on a massive high. He's settled into the role of The Doctor immediately and Inferno gives him a chance to be the Doctor in defeat**. Plus there's a moment in this story when the Doctor shouts: 'Listen to that. That's the sound of this planet screaming out its rage" That line, the way Pertwee delivers it has made me use it a number of times when terrible things are happening to the environment. Or in politics.

*There is a reason for this.

**Not the Doctor in Distress, which is a terrible record. Google it. No. Don't Google it. It is horrible.