CLASSIC DOCTOR WHO ON BRITBOX – The Ambassadors of Death 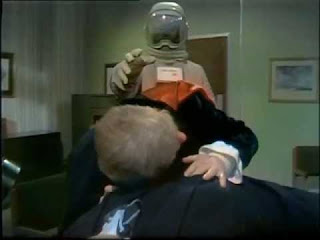 On 26th December 2019, 627 pieces of Classic Doctor Who content were made available to Britbox subscribers. Every Sunday in 2020, our Doctor Who expert, Tony Cross, looks back at some of the classic stories. Here is the Third Doctor adventure The Ambassadors of Death...

I write this article [first published in 2017 - Ed] in the afterglow of the announcement that Jodie Whittaker will be playing the new Doctor. The first woman to play the part. I wasn't convinced the BBC would ever have the courage to do it. But they have. Good luck to Jodie. Welcome aboard. I'll probably write more about this later, which I'm sure will thrill my reader.

But what of The Ambassadors of Death I hear you cry. Well, I enjoyed this. Mostly. I have one quibble, which is how rubbish UNIT are at actual fighting and how easily they have rings run round them. This, though, is UNITs fate in most stories. They constantly face creatures that can't be killed by convential weaponry. UNITs casualty rate must have been horrific? How did a soldier end up in UNIT? Was it voluntary? If so how did word not get around the British military that joining UNIT was effectively a suicide mission? Is the Brigadier actually a terrible officer? Sorry, all that was brought on by watching some pathetic soldiering in the final episode. Come on Brigadier get it sorted out.

Although to be fair to the Brigadier it is clear that he had his doubts about General Carrington (John Abineri) early on. And there's a lovely exchange between the Brigadier, who doesn't want to speak ill of a fellow officer, and Ralph Cornish (Ronald Allen):

Brigadier: I think the General is a little over-wrought.
Cornish: I think he's mad.

Which brings us to one of the best things about this story: the villains. That's not the Ambassadors themselves. It's General Carrington and his various associates. John Aibineri is superb as Carrington., who is a man acting in what he thinks is the best interests of his world. He's been mentally shaken by the death of a colleague at the hands of the Ambassadors* earlier and he blames them. He twists that into them being a threat to the entire world and tries to stir up events to create a war between Earth and these mysterious aliens. He's not a moustache twirling, evil laughter black hat villain. He's a broken man. His final exchanges with the Brigadier and the Doctor in Episode Seven are actually quite moving.

One of Carrington's henchmen, Reegan (William Dysart), is also brilliantly played. A dry-witted, intelligent sadistic bastard he's one of the best henchmen in Doctor Who. The fact that he doesn't die at the end is great and part of me hopes that he survives another day. Perhaps UNIT use his skills in a poacher/gamekeeper way? Perhaps not.

Ronald Allen is Ralph Cornish. The problem I have with Ronald Allen is that I remember him most as David Hunter in Crossroads, which was a soap opera with a reputation so terrible that Victoria Wood was to create Acorn Antiques as piss take of it. That, combined with his semi-regular popping up in The Comic Strip Presents & the fact that he's in frankly awful The Dominators makes him a hard actor for me to take seriously. But he's suitably solid and serious in this story.

There are some great cliffhangers in this story too. (I miss cliffhangers) The Ambassadors are suitably creepy without being hugely memorable but I willing to think that they must have been in Steven Moffat's head when he wrote Silence in the Library/Forest of the Dead, although I could be wrong.

Yes, the story is too long but it doesn't particularly drag for me. However Liz Shaw's 'escape' is a tad annoying as I don't think Liz would be that stupid. The problem for Liz (and for Caroline John) is that the writer really doesn't know what to do with her as a character. She's too intelligent to be standing around asking stupid questions and, alas, that's what Pertwee seems to need. But Caroline John does fine work with what she's been given.

I should also pay tribute to appearances from two Doctor Who stalwarts: Michael Wisher as the journalist John Wakefield and Cyril Shapps as the scientist Lennox. Michael Wisher seems to be able to get exactly the right TV journalist tone as Wakefield who seems happy to broadcast the rantings of an insane General to the whole damn world whilst Cyril Shapps does the Shapps thing, which I love. His characters always seem to be in permanent danger of cringing to death. Oh, Lennox's death I put entirely down to bad work on behalf of the Brigadier btw who, instead of going to see him immediately, decides to faff around long enough to allow the bad guys to stick a radioactive isotope in his cell, which brings me back to my original quibble about UNIT's competence in this story.

So, to conclude The Ambassadors of Death is a reasonably enjoyable, slightly over-long story raised by some excellent performances. I also love the ambitions it has for a British Space programme that has taken us to Mars. More than once. It isn't perfect. It's probably the weakest story of Season 7 so far, but that still makes it an exceptional piece of Doctor Who.

*They never get a proper name. They are on Mars when Carrington first meets them but there is never any explanation of who they are and why they are where they are.