CLASSIC DOCTOR WHO ON BRITBOX – Doctor Who & The Silurians 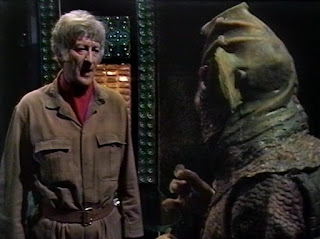 On 26th December 2019, 627 pieces of Classic Doctor Who content were made available to Britbox subscribers. Every Sunday in 2020, our Doctor Who expert, Tony Cross, looks back at some of the classic stories. Here is the Third Doctor adventure Doctor Who & The Silurians...

Doctor Who & The Silurians is as fine a Doctor Who story as you'll ever see. Yes, it is probably a tad long but then that gives us the space to see The Doctor actually doing science and some genuinely disturbing scenes in and around Marylebone Station as the Silurian plague starts to take its toll. It also allows some fine British character actors room to give their characters life.

The cast is superb: Fulton McKay as Dr Quinn, Norman Jones as Major Baker, Peter Miles as Dr Lawrence, and Geoffrey Palmer as Masters. All four of whom are doomed in their own ways. Doomed by greed for knowledge. Doomed by a desire to make up for a past mistake. Doomed by a failing career or the desire to protect his career.

Dr Lawrence's final scene, when he goes berserk, is painful to watch (in the right sense) and hilariously English. He's dying, mad and the Brigadier and Liz are circling him nervously and trying not to look. It's as if he finally dies because he's caused so much of a fuss. Dr Lawrence is almost an overhang from the Troughton era. The leader that can't lead. The difference perhaps is that Dr Lawrence has a fine line is dry snark before things get too bad but eventually in his refusal to see the obvious truth pushes him over the edge.

But let's go back a bit. (Admire the technical brilliance of the writing in this article. It's like a well-oiled machine.)

Season 7 consists of one four-part story & three seven-part stories. All set on Earth. This was a decision of the departing producer, Derrick Sherwin, but wasn't one that new producer, Barry Letts, liked. Nor did his script editor Terrance Dicks. What it meant was they had to come up with some cunning ways of doing 'Earth Invasions'. Malcolm Hulke's solution in Doctor Who & The Silurians was to have the aliens already here. Or that the enemy wasn't even an alien. The Earth had once been theirs and they'd quite like to take it back from the mammals with ideas above their stations.

The Silurians are a species in Doctor Who that seem to have a life beyond just being an enemy of the Doctor. Their history is hinted at here - and will be given more depth as the years go by in the various parts of the Whoniverse - but the minimum we know is that they were an advanced scientific species that went into hibernation in fear of an impending cosmological catastrophe that never came to pass. Their alarm clock then never went off so they over-slept and let us take over the world. When the British government builds a nuclear power station and Cyclotron* on top of their hibernation place it seems to trigger a handful of them to wake up. They start syphoning off energy, which causes problems for the base plus the base seems to have a weird affect on the minds of those who work in it. The Silurian also make contact with Dr Quinn whilst he's caving. Dr Quinn sees this as an opportunity to get Silurian scientific solutions. But some cave explorers die and UNIT get called in to review what's happening. Then etc etc until the end and the Brigadier blows up the Silurian base much to the disgust of the Doctor.

Two things to note here. Nicholas Courtney is fantastic as the Brigadier in this story. He feels like a proper military man and isn't any kind of uniformed buffoon. And at the end he's devious and ruthless. He knows The Doctor will try and stop him destroying the Silurian base so he deliberately lets him leave. He also willingly follows orders to kill the Silurians. If these were the only Silurians then our beloved Brigadier has just committed genocide. And the Doctor witnesses it. In a way that's the point at which Doctor Who as a television series is done. How can the Doctor and the Brigadier continue to work together after this?

Yes, the Silurians - or some of them - have tried to genocide humanity but the Doctor knows they're not all like that. The Brigadier would argue that this has to be done because humanity needs to be protected from that threat. A threat that they might not be able to defend themselves against. The only good Silurian is a dead one. It's pretty dark. This is murder. But we've got five more seasons of Jon Pertwee to go and the gradual unsoldiering of UNIT to come. I love the Brigadier and UNIT but at the end of this story, you have to ask yourself why.

Also, this is only Jon Pertwee's second story and yet he's already so settled in the part. It feels like he's been the Doctor forever. We talk about Tom Baker being meant to be the Doctor but watching this you have to say that Jon Pertwee was born to be the Doctor. He has the charisma to burn. Yes, his Doctor can be a tad patronising - witness his tone with Miss Dawson (Thomasine Heiner) when talking to her about Dr Quinn. But he's trying to do the right thing in the face of hostility from friends and enemies.

Poor Caroline John as Liz Shaw is left at a bit of a loose end though. She's reduced to answering phones and checking HR files, although in Episode 6 she does at least get to assist the Doctor in attempting to find a cure to the Silurian plague. John is clearly a good actress but I fear Liz Shaw is a tad unwritten.

A brief word on the design of the Silurians. They look slightly dated now but they look proper alien here. Whereas the modern Silurians have been humanised to a degree that you can have a marriage between one and a human being you can't imagine Jenny settling down with one of these Silurians. Also, their third eye**, which has some kind of sonic power so can be used as both a weapon and a way of digging through rock to convenient locations close to the person you want to kidnap, is effective.

The director, Timothy Combe, gets some great shots from the Silurian point of view. In fact, Combe's direction is pretty damn solid throughout. The scenes of the Silurian out on the Moor are well done. He also does a fine job of keeping the Silurians hidden until their appearance actually has an impact. The first couple of episodes should be part of the instruction manual of anyone making Doctor Who, although I will politely skate over the dinosaur. Because I am a gentleman.

So, Doctor Who and the Silurians is a fine story. It's well-directed, well-written and well-acted. If you've not watched it you should do. And don't binge watch it. Classic Doctor Who thrives on breathing space between episodes.

Next up...The Ambassadors of Death.

*Which appears to be a particle accelerator aka a Large Hadron Collider.

**This use will be forgotten by the time The Silurians reappear in Warriors of the Deep when people think it is a signal to announce which of them is speaking. By the time we get around to New Doctor Who it will disappear altogether.