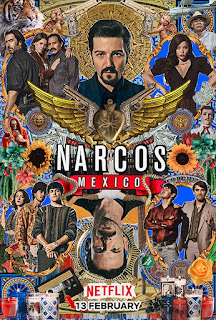 I’ve already mentioned I don’t really do box set bingeing. But I’d pretty much exhausted my interest with what was available on Netflix after just two series, so plumped for the old comforting tale of psychopathy and ill manners that is Latin American narco-capitalism. I started with series 1 of Narcos, telling the story of Pablo Escobar’s rise to be the narco kingpin of Medellin. And while I enjoyed it, it was a subject I already knew quite a lot about. So I veered towards Narcos Mexico, because I wanted to try and understand the mayhem and madness that still plagues Ciudad Juarez today, whereas Colombia has settled down to some extent and passed the cocaine production crown to Peru.

But where the original Narcos was fast paced in establishing the line of development of narco-capitalism, Narcos Mexico takes 18 episodes to really grip, with revelations of the narcos’ influence on the 1988 General Election, and eighteen hours of plot development and character relationship plotting is just too damn slow. Escobar basically declared war on the state, assassinating judges and top cops, while Gallardo was already dealing with a stacked hand as every cop and army man in his bailiwick was already taking bribes. Fewer explosions and bullets to the back of the head, equates to less drama I’m afraid. Even the connections to the upper echelons of Mexican government and society didn’t make for terribly riveting viewing.

But perhaps the real issue, is that though both drug kingpins were psychopaths, yet Felix Gallardo cannot hold a candle to Pablo Escobar when it comes to watchability. Be it the real life character, or the performance of Diego Luna, compared with Wagner Moura’s spellbinding turn as Escobar. Besuited Luna’s two tics are to chain-smoke and scowl, t-shirt and jeans clad Moura’s many, including hitching up his keks over his pot belly, chain-smoking dope and a hug or a pat on the shoulder that signals imminent lethal intent. 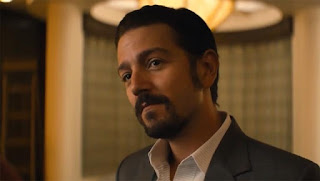 Then there are parts of the plot that strain belief. Everything is taken to the brink, but Felix always comes out tops, mainly because his partners and rivals always back down at the last moment. I don’t know quite how true to reality this portrayal of history is, but if any of his fellow psychopaths had the cojones, they could have offed Felix at any point and saved a lot of pedestrian viewing time. Having spent so many episodes convincing us what an unfeeling, heartless bastard Felix is, series 2 asks us to believe he suddenly misses the warmth of his family whom he had abandoned (or even more incredulous, because the strength of a rival drug trafficker is based on all the feels he has from his family and Felix sees this as a way to compete). Acosta, an old time heroin narco boss, is finding while his skills are transferable to transporting Colombian cocaine, the old boy honour system isn’t. We get a lot of him angsting about keeping the old mores and the noble death that inevitably entails, as if he was some sort of narco samurai. But even worse, the scriptwriters were asking us to credit that an American daughter of a US Senator, herself absolutely a yee-ha kickass Texan cowgirl, would fall in love with this non-sophisticate of advanced years and regressive morals.

However, I did enjoy two of the other female characters, trying to carve out their own slice of the narco-pie in what is a very patriarchal country, let alone industry, even if Teresa Ruiz’s Isabella struts around the set as if it’s a catwalk. The American DEA agents are fairly uninvolving, Walt Breslin is not just there to gain revenge for his fallen colleague Kiki Carmarena, but because his own brother succumbed to his addiction Stateside, pretty flimsy characterisation that Scoot McNair struggles to do anything with. And yet the US’s war on drugs policy being shown to be an empty promise is perhaps one of the more interesting features of both the Narcos’ shows, but because the Leviathan of the US is so slow moving, there is little change or development across both the Mexico series and the first Colombian one.

Now series 3, which hasn’t had a confirmed broadcast date yet, finally may take us to an understanding of the present day situation. Finally El Chapo should come into his own, the small, squeaky voiced Alejandro Edda is all bristling aggression, baby-faced spoilt brattish emotion, in between winning childlike elation, but so far has been restricted very much to a supporting role. I look forward to his attempt to dominate the screen. But for now, it’s a return to series 2 and 3 of Narcos and stick to what I know.