CLASSIC DOCTOR WHO ON BRITBOX – The Monster of Peladon 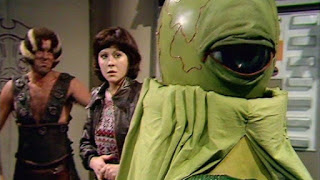 On 26th December 2019, 627 pieces of Classic Doctor Who content were made available to Britbox subscribers. Every Sunday in 2020, our Doctor Who expert, Tony Cross, looks back at some of the classic stories. Here is the Third Doctor adventure The Monster of Peladon...

There's nothing "only" about being a girl.

Although this time instead of being a Who-ed up version of Britain's entry into the EEC (as it was) we have the Miners' strike.

Since Peladon's entry into the Federation the Miners have been simmering. They're working harder, being asked to use alien - possibly blasphemous - technology & getting paid a pittance. (There also seems to be about eight of them, which becomes a bit obvious in the last couple of episodes where the same actor dies about three times.)

They're on the brink of revolution with their moderate leader Gebek (Rex Robinson) trying to keep a lid on the more revolutionary & hot-headed Ettis (Ralph Watson.)

A quick note on the Peladon class system: it seems to be based on hair. If you've got red hair with white streaks you seem to be a noble, if you've got badger afros - which is the only way to describe them - you're a miner. What do the guards have? Perms? It's a bit distracting really.

Ortron accuses the Doctor of being a spy, then of being in league with Gebek. The Queen doesn't know & being a woman on Peladon is not taken seriously, despite being Queen. Thankfully Sarah Jane is there to give her a lecture on Women's Liberation, summed up pithily as: "there's nothing only about being a girl". The Doctor meets up with the Aggador, again. Does something that isn't quite the Venusian lullaby and gets Aggador onside, again.

Then the Ice Warrior's turn up, having been summoned in a panic by Alpha Centuri, who seems to have spent the last fifty years on Peladon.

I have to say that although Alpha Centuri's physically appearance is a wee bit risible Ysanne Churchman's vocal performance is brilliant. Alpha Centuri has a life of his own. Fussy, frightened, political but in this story a bit braver. It's up there with John Dearth's performance as BOSS in the Green Death as one of the voice performances in Doctor Who. Bring back Alpha Centuri I say...OK, maybe not.

Anyway things liven up a great deal when the Ice Warrior's, led once more by Alan Bennion. This time as Ice Lord Azaxyr. The arrival of Azaxyr, purporting to be from the Federation but working with mining engineering Eckersley (Donald Gee) to take over Peladon for trisilicate (MacGuffin of the week). Trisilicate is this story's essential mineral. In this case because the Federation are at war with Galaxy 5 & everyone's technology is dependent on trisilicate. He who controls Peladon, controls trisilicate. He who controls trisilicate, will win the war.

Eckersley, with Azaxyr, has been using 'the spirit of Aggador' to stir up trouble with the miners by scaring & killing them. They are working with Galaxy 5. Eckersley because, as is revealed in the final episode, he wants to rule the Earth (an unnecessarily grandiose touch really, greed would have been enough of a motive surely) and Azaxyr because he's from a breakaway warmongering Ice Warrior faction.

This is one of the problems with watching a whole Doctor Who story in one sitting, rather than spread over six weeks. Would I, watching over that time, have noticed that various deaths were the same actors over & over again? Would the endless wondering around polystyrene mine workings & corridors have seemed less interminable? Would Sarah Jane's sadness over the Doctor's alleged death at in episode six have seemed quite so annoying as she'd already gone through the upset at the Doctor's supposed death a couple of episodes earlier?

Liz Sladen does these well but if I were a companion of the Doctor after a couple of adventures I'd start to assume the Doctor was alive & well until I saw the corpse. In fact, again Sarah Jane gives the story real energy when she appears. I have to say Liz Sladen has been a breath of fresh air to the final season of Pertwee, giving the whole programme a bit more oomph. There's a real bite to Sarah Jane, which not many previous companions have had. Although I'd say this was her weakest story so far in terms of what she's asked to do by the script.

Fundamentally this isn't as good a story as Curse of Peladon, although it is more obviously political. It's nice to see as patrician a Doctor as the Third siding with the workers, even if he's a bit anti-revolutionary. It's a shame the most radical of them, Ettis, has to be portrayed as totally insane towards the end like some Peladonian Arthur Scargill (Rupert Murdoch version). Even if the 'Women's Lib' stuff is a bit heavy handed there's at least an attempt to address the issue.

It also suffers because like Terror of the Autons with Spearhead from Space the sequel shares too many plot points with the original story plus at six episodes it is too long.

Not bad, not great.

And with that we are almost at the end of the Third Doctor's era. Only Planet of the Spiders to go...