CLASSIC DOCTOR WHO ON BRITBOX – Planet of the Spiders 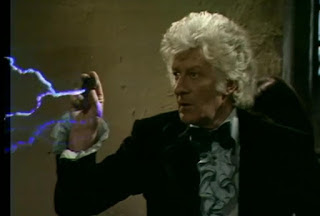 On 26th December 2019, 627 pieces of Classic Doctor Who content were made available to Britbox subscribers. Every Sunday in 2020, our Doctor Who expert, Tony Cross, looks back at some of the classic stories. Here is the Third Doctor adventure Planet of the Spiders...

That was Planet of the Spiders & that was the end of the Jon Pertwee era. It seems fitting, maybe 'right', that the last words of the Pertwee era were uttered by Nicholas Courtney as the Brigadier.

This story has some great moments.

The stories plot is that some giant spiders on Metebelis III want the blue crystal that the Doctor took, without realising that it had any significance at all. Partly because when he took it, it didn't. They break through to Earth courtesy of some misguided Buddhist's lead by Lupton. Actually, Lupton isn't misguided, he's bitter, broken and twisted. (Although where he got the idea that learning Buddhist meditation techniques would enable him to get great power from is beyond me).

Anyway Lupton (played by the voice of BOSS John Dearth) is a slightly rumpled, sweaty sort of a villain. He has ideas above his station but finds himself the conduit for a large spider.

Mike Yates, who has gone to the same meditation centre, in an attempt to clear his mind post-Invasion of the Dinosaurs has worked out that something is up & asks Sarah Jane to come down in order to have a sniff around & then alert the Brigadier if something is afoot. Lupton tries to stop Sarah Jane by talking around Cho-Je (Kevin Lindsey) one of the two monks that run the centre, when that fails he tries to kill them via a bizarre illusion.

Lupton grabs the crystal from the UNIT HQ - ah, Brigadier your security is once more laughable bad - & finds himself on Metebelis III, followed unintentionally by Sarah Jane & intentionally by the Doctor.

My main quibble in this story is the scenes with the two legs - sorry, humans - on Metabelis III. They're just a bit two-dimensional & pretty every actor involved puts in a 'will this do' performance with the honourable exception of Geoffrey Morris as Sabor who at least tries. One of the leading humans, Arak, is played by Gareth Hunt. They're obviously there to pad out the story a little but were they necessary? Surely the threat to the Earth was enough.

There's arguments galore: between the spiders & Lupton; between Arak & his brother Tuar; between the Queen of the Spider's & the Lupton spider. But behind everything is the 'Great One'. Feared by all, including the Eight Le, sorry, the Spider's. It turns out that the spiders got control because they arrived on board the same ship as the humans, which crashed & got warped by the crystals, which help increase intelligence.

The humans launch a rebellion & the Doctor meets the Great One who sends him back to Earth to get the great crystal after demonstrating her power by taking over the Doctor's mind.

At the meditation centre meanwhile all this is coming to a head. Tommy (John Kane) who we first meet as a good intentioned chap with learning difficulties has his intelligence raised & released by the crystal. The rest of Lupton's meditation circle get spider-ed. So does Sarah Jane, by the Queen Spider.

The Lupton circle try to seize the blue crystal from the office of K'anpo. The other older Buddhist Monk who it turns out is a Time Lord & the Doctor's old 'guru'. Cho-je also...well, he's not quite what he seems. The scenes between K'anpo & the Doctor in the final episode are wonderful. It's the calm before the storm. There's a bit of philosophy thrown in & when K'anpo says that there is only one thing the Doctor can do you know that the Third Doctor's time is up.

The Doctor is to return to Metebelis III and return the great crystal to the 'Great One' even though it will mean his death. The 'Great One' turns out to be a ridiculous huge spider with delusions of grandeur & an inability to accept advice. The great crystal will complete a web of crystals designed to expand 'The Great One's' mind to infinity. This, the Doctor, warns will lead to a massive feedback & will kill her. She doesn't listen.

The Doctor, dying, returns to the TARDIS. The spiders die as the Great One dies. The humans of Metebelis III are released and the Great One's mountain HQ blows up quite impressively.

The next thing we see is a rather touching little scene. Sarah Jane is in the Doctor's lab. She picks up his coat off of the coat rack, hugs it & give it a little sniff. Then the Brigadier comes in. It turns out the Doctor's been gone three weeks. Sarah doesn't expect to see him again because the Doctor knew he was going to die. The Brigadier attempts reassurance but Sarah Jane's given up...at which point the TARDIS rematerializes. The Doctor got lost in the vortex but the TARDIS got him home.

The whole regeneration scene that follows is beautifully played by everyone, from Jon Pertwee's short dialogue; Liz Sladen's sadness, confusion & end of tether-ness when Cho-Je appears, to Nicholas Courtney's stiff upper lipped wit at the chaos going on around him.

Cho-Je disappears, the Brigadier gets the last line & Jon Pertwee becomes Tom Baker. It's quite emotional in a Classic Who understated way.

This is a great send off for Jon Pertwee, whose performance throughout is excellent, especially in the final couple of episodes. Yes, there's some naff bits but there's some wonderful moments too. The spiders are voiced by Ysanne Churchman, Kismet Delgado & Maureen Morris & have a real life to them, as well as differences in personality. The final total insanity of the 'Great One' & the pain at her death is quite terrifying in truth. It's no wonder the Doctor's afraid. Liz Sladen's good again. The regulars put in an excellent stint to.

John Kane's performance as Tommy is rather sweet to. He starts off looking like a bit of a cliché but conveys the changes in Tommy superbly. Kevin Lindsay as Cho-Je, doing Tibetan is good & the Buddhist conversations have a ring of reality about them. I also have a liking for George Cormack as K'anpo. I love the idea of a Time Lord who runs off not to seek power, or even look for knowledge & experiences like the Doctor but to become a Buddhist Monk.

So all in all a great send off for the Third Doctor. I for one will be looking forward to watching it again.