CLASSIC DOCTOR WHO ON BRITBOX – Robot 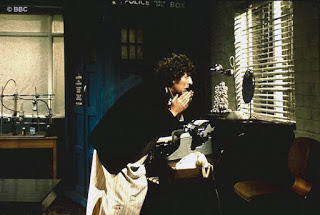 On 26th December 2019, 627 pieces of Classic Doctor Who content were made available to Britbox subscribers. Every Sunday in 2020, our Doctor Who expert, Tony Cross, looks back at some of the classic stories. Here is the Fourth Doctor adventure Robot...

Before I go into the details can I just admit to a horrific bias here. Tom Baker is MY Doctor. He was the Doctor when I first start watching the show - my first clear memory being Leela tearing Magnus Griel's mask off in the Talons of Weng-Chiang, something that I think must have terrified the six year old kid I was back in 1977. This means I tend to find even the worst Tom Baker stories come wrapped in nostalgia.

That being said, Robot is from the Third Doctor template: it's Earth, it has mad scientists making mad plans for world conquest & it has UNIT doing things military. All of which makes sense from a production team point of view as it puts a cloak of comfort around the shock of a new Doctor.

So what of the Fourth Doctor. Well, he's a burst of energy full of "eccentric enthusiasms", just like Tom himself. Terrance Dicks deliberately wrote the Robot Doctor to be as wild and eccentric as he thought Tom himself was, with the view that they could always tone down the performance as time passed. That didn't happen, obviously.

It's hard now to separate Tom as he is now, with the success of the part behind him and the Fourth Doctor.

The Fourth Doctor's carelessness and chaos is a clear contrast to the dandified and tidy Third. It's reflected in both the costume, which is a brilliant piece of design by James Acheson and the performance.

The Fourth Doctor is effervescent, eccentric and exciting.

We also see the introduction of Doctor Harry Sullivan, played by Ian Marter, who is of the 'nice but dim' school of the British military. The production team had bought him in on the assumption that the new Doctor would be an older actor and a younger man would need to do the action stuff. With the casting of Tom Baker this raison d'etre disappeared and Harry suffers as a result, often being a figure of fun. But Ian Marter gives Harry the right amount of likeability so he's not a drag.

The basic story is King Kong meets Frankenstein, with a Robot in place of the big monkey.

There's a bunch of scientific fascists - mostly based at ThinkTank - who want to rule the world led by Miss Winters (Patricia Maynard) and her creep minion Jellicoe (Alec Linstead), they've got a Giant Robot, which is the creation of Professor Kettlewell (Edward Burnham) and his big hair to help them rob a series of top secret labs in order to get hold of the launch codes for the superpower's nuclear weapons.

It's a big old blackmail plot.

UNIT get on to the case. Sarah Jane meets the Robot in the flesh. I have to admit that I think the Robot's design is pretty impressive, again Acheson's work, although the hands and feet don't quite work.

Winter's and Jellicoe make an attempt to convince Sarah that their Robot can't kill people and the poor thing virtually suffers a breakdown. Sarah's concern for the Robot, mocked by Miss Winter's, will cause her a lot of hassle later on.

The Doctor's investigations of various crime scenes dovetails with Sarah Jane's and UNIT are onto the Winter's plan pretty sharpish but lacking proof the Brigadier is unable to do much initially. Sarah is captured when it turns out Kettlewell isn't as innocent as his bumbling about leads one to think. Sarah's as a hostage & the baddie retreat to a nuclear bunker ready to carry out their plan. Adding Harry to the hostage list after his undercover work at ThinkTank is, err, uncovered.

The Giant Robot kills Kettlewell, goes mad & then grows to gigantic stature courtesy of a cock-up from the Brigadier. Sarah Jane gets to be Fay Ray for a brief moment, there's a special guest appearance from an Action Man tank (which I shall pass over in a dignified manner)and several UNIT privates get killed before the Doctor 'kills' the poor Giant Robot using Kettlewell's 'metal virus', which Kettlewell himself had kindly explained to Sarah Jane and Benton. Benton remembers just in time for the Doctor to bubble up a bucket of the virus in an active solution.

The Doctor, Sarah Jane and Harry Sullivan exit stage left in the TARDIS.

It's a pretty bog standard Doctor Who story really made interesting because it is Tom Baker's first story, has some lovely costume design from James Acheson and some nice, if unsubtle, guest performances.

It makes a nice comfortable introduction for a new Doctor though.