CLASSIC DOCTOR WHO ON BRITBOX – The Masque of Mandragora 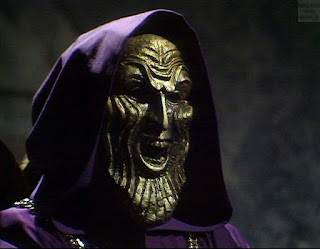 On 26th December 2019, 627 pieces of Classic Doctor Who content were made available to Britbox subscribers. Every Sunday in 2020, our Doctor Who expert, Tony Cross, looks back at some of the classic stories. Here is the Fourth Doctor adventure The Masque of Mandragora ...

Season Fourteen kicks off in the same excellent style as Season Thirteen finished.

There's no doubt that the Hinchliffe-Holmes production team have the knack of producing excellent stories, Tom & Liz Sladen have formed a wonderful partnership & there's a real confidence about the series.

I also have a soft spot for the pseudo-historical, which build on the BBC's understanding of how to make good period drama & rarely age quite as badly as pure sf stories do. It also benefits from a lot of location footage in and around Portmeirion, although that does make some of the catacomb sets look a bit obviously artificial. But fundamentally Portmeirion does feel more Renaissance Italy than a series of sets in a small studio would do.

The main villain is the Mandragora Helix, which seems to be an aggressive will-o-the-whisp but there are layers of sub-villains: Hieronymus (Norman Jones), an old school astrologist & top man in the Cult of Demnos & Count Frederico (Jon Laurimore), a wannabe Medici with the eyes on his nephew's Dukedom. Finally, we have the Rossini (Antony Carrick), the Count's Renaissance thug.

Said nephew Duke Giuliano (Gareth Armstrong) is a man with his eyes to the future, a dreamer & frankly a bit wet. He's like Hamlet without the oomph. However he's backed up by friend Marco (Tim Piggott-Smith in a frankly unconvincing wig) who is Horatio to Giuliano's Hamlet.

The Renaissance setting pits Hieronymus' pagan world view against the rationality of Giuliano. The Mandragora attack on Earth at this place & time is a deliberate attempt to hold back human progress.* This being Doctor Who we are automatically on the side of Giuliano. Interestingly despite being Renaissance Italy there is no talk of the Church, we only see the Cult of Demnos.

A lot comes together well in this story: script, location, design and performances.

Norman Jones hasn't put a foot wrong in any of his three Doctor Who appearances but I think Hieronymus is his best. He makes you feel how angry & bitter he is when his beliefs are mocked. Mandragora is his chance of vengeance & power.

Jon Laurimore's Count Frederico is also a fine performance of barely restrained nastiness & renaissance deviousness. Laurimore also LOOKS the part. Have a look at paintings or statues of some of the Renaissance Italian nobility & they have similar faces.

The good guys are well played. Armstrong's Giuliano is wet but he's had power thrust upon him early & he is uncertain. This is a man who thinks too much. In the cut & thrust of Italian Renaissance politics you can't see him lasting long without a bit more decisiveness, which is provided by Tim Piggott-Smith's Marco.

Tom Baker gets some great stuff to do & there's a lovely little scene between him, Liz Sladen & Armstrong where Giuliano asks him if he's a scientist. Watch out for it. It's worth it for Liz Sladen's soundless line.

My only quibble, and there must be one, is the ending is a tad...glib but then Doctor Who's eternal problem is how to end all this jeopardy in a way that doesn't leave you open to accusations of deus ex machina or just plain cheating. It's hard to do.

It's also on DVD so there's no excuse not to watch it.

*What Count Scarlioni & Azal would make of this we can only wonder. All those attempts to drive mankind’s development forward & some fizzy lighty thing comes along & tries to ruin it.