CLASSIC DOCTOR WHO ON BRITBOX – The Hand of Fear 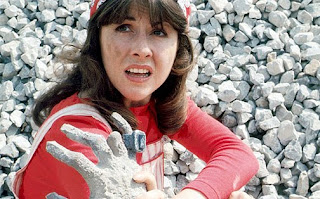 On 26th December 2019, 627 pieces of Classic Doctor Who content were made available to Britbox subscribers. Every Sunday in 2020, our Doctor Who expert, Tony Cross, looks back at some of the classic stories. Here is the Fourth Doctor adventure The Hand of Fear  ...

Ah, the Hand of Fear. This is Sarah Jane's last story - Five Doctors excepted - in Classic Who. How do they reward her? They get her to dress up as a female Andy Pandy! Why? Poor old Sarah Jane. Over the course of her time as a companion she's been hypnotised, shot at, tied up, molested by Condo, threatened, arrested & taken over by a Giant Spider. But that's not enough, no. Now they make her dress like a toddler.

Sarah Jane's a good companion. Yes, she has a tendency to wobbly-lipped weeping at the merest hint that the Doctor might be dead but she's brave, feisty & a damn fine journalist. You can see why she'll end up in her own series. There aren't many Doctor Who companions you can imagine doing that, even popular ones like Jamie. They need the Doctor but because Sarah Jane was given a life outside UNIT from the get go, which allowed her to drive her own stories she's got the strength to carry on a fictional life away from the Doctor.

This is down to a combination of good writing & perhaps most importantly Liz Sladen's performance. Barry Lett's said that one of the reasons he cast Liz was because she could do 'fear & bravery' at the same time, which is actually one of Sarah's key strengths. We know she's afraid, sometime terrified, but she - just about - holds herself together so that she can help her best friend, The Doctor. Liz worked well with Jon Pertwee but with Tom the companion-Doctor relationship reaches something of a peak in my opinion.

This is the relationship by which all Doctor-Companion relationships are to be judged. Well, in the Classic series anyway.

Liz is great in this to. Childlike & sinister when she's taken over by Eldrad. This is emphasised by some good directorial choices by Lennie Mayne, especially in Ep 1 as she approaches the Nuton Power Complex. It's all nicely creepy.

Rex Robinson makes his third Doctor Who appearance, this time as Dr Carter. No silly wig this time but he does get to wield the infamous fake spanner in order to attack the Doctor. Last seen in the hands of vegetable militant Harrison Chase.

Glyn Hughes plays Professor Watson, head of the Nuton Power Complex & does the best with what is potentially a role with all the three-dimensionality of Bod. I might be wrong here but I think the phone call to his family as everything looks likely to explode around him might be the treacliest moment in Classic Doctor Who up to now.

I do like the cleverness of Eldrad - the villain - reconstituting himself copying Sarah & coming out of the Nuclear Reactor as a female, played very well by Judith Paris. She's subtle & devious, which is a bit of clash with Stephen Thorne's shouty bullying male Eldrad. As Sarah says, I prefer her to him.

Eldrard also gets one of the most undignified exits of any Doctor Who villain ever. However I won't spoil it for you too much.

And then the Doctor gets the call from Gallifrey - or Gallifree as Tom seems intent on pronouncing it - so Sarah's got to go. Aw.

It's a lovely little leaving scene, apparently worked out between Holmes, Hinchcliffe, and Sladen & Baker. It's sweet, it leaves a lot unsaid & makes me feel just a little sad. It's played to perfection to by Tom & Liz. It's subtle stuff but one of the nicest scenes in the programme’s history. It also proves that you don't need to lay emotions on with a trowel to actually affect people.

There's one major piece of silliness involving the RAF - using stock footage as used in Seeds of Doom - firing some kind of nuclear bomb into a nuclear power station as a way of stopping a creature that we've already established thrives of radiation. Never mind the ridiculousness of the fact that driving about five miles away seems to be a 'safe' distance from the site of what is about to be the first nuclear bomb dropped on British soil.

Whether that kind of quibble stops you enjoying the story is entirely up to you really. I know some people can't stand plot holes but I'd say there's rarely a Doctor Who story without one of them, if analysed deeply enough.

In the end this isn't up to the standards of Season 13 or Masque but it has its moments. It is also a lovely farewell to a fine companion.