CLASSIC DOCTOR WHO ON BRITBOX – The Seeds of Doom 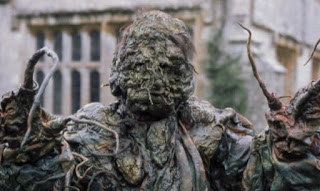 On 26th December 2019, 627 pieces of Classic Doctor Who content were made available to Britbox subscribers. Every Sunday in 2020, our Doctor Who expert, Tony Cross, looks back at some of the classic stories. Here is the Fourth Doctor adventure The Seeds of Doom ...

Season 13 finishes on a high with 'The Seeds of Doom' thankfully, with the Doctor and Sarah taking on the Krynoids and Harrison Chase (Tony Beckley), a millionaire with a plant fixation.

It is a simple tale of human meet pod, pod turns human into plant, plant tries to destroy mankind. The fate of the two characters who get turned into Krynoids: Winlett (John Gleeson) and Keeler (Mark Jones) is pretty horrible. Not dissimilar to what happens to Noah during 'The Ark in Space'.

In the case of Keeler the change is more horrific because we've got to know the character a bit, with his lack of courage & unwillingness to do violence. That's combined with Chase's morbid curiosity. He want Keeler to change & he wants to watch.

In fact Tony Beckley's Harrison Chase is one of the best bits about this story. He's a plantaholic, posh & totally bonkers but to Beckley's eternal credit he never quite crosses the boundary into silliness, even when given some barmy dialogue.

He's also well-supported by Scorby (John Challis) his violent sidekick & Hargreaves, the Butler (Seymour Green amusingly). Challis in particular gives a good impression of an unpleasant, violent & self-centred bastard with Scorby who when Chase's insanity becomes obvious & the Krynoid goes berserk is forced to side with the Doctor. You almost want Scorby to make it to the end of the story but he's just been too much of a bastard for Doctor Who & it is his destiny to die.

It's actually a surprisingly violent story. The Doctor himself gives Chase's chauffeur a mighty fine right-hook - the second Baker's Doctor has thrown; Scorby slams the Doctor down; people get composted or threatened with composting via a large unpleasant piece of machinery & Chase shapes up to punch Sarah (which happens off screen but the implication is pretty clear & nasty). Sometimes it feels more like an episode of 'The Sweeney' than Doctor Who.

Oh and Chase uses one of the world's most obviously fake giant spanners to knock someone unconscious, which is delightful.

Douglas Camfield's direction is great except one thing. He makes the mistake of filming the feet of both the almost Krynoid monster - which is an Axon costume re-used and painted green fact fans - & the larger beastie when it attacks Dunbar (Kenneth Gilbert), the Doctor & Sarah.

One day I shall write a long treatise on why feet are the biggest weakness in Doctor Who monster design but for now let me just say it is better to film pretty much everything except the obvious shoes or waddling feet of some poor actor. It's only a minor quibble I admit in a story that is well-paced for a six parter (the only one in Season 13 thankfully) & well-directed.

The scenes in the house in the last episode with the plants threatening to break in through the window & roof feel tense enough & I had a flashback to watching this as a small - I would have been 5 - child because the scene where the vines smash through the window whilst Sarah is watching had the chill of recognition.

I was genuinely terrified then. What on Earth were my parents thinking of, letting a 5 year old watch this! Fortunately my Mum would always reassure me, as I peeked through the crack in the door, that 'it was only television' so that probably makes it OK.

I should also give credit for two other performances. Firstly, Michael Barrington (as Sir Colin Thackery) whose an amusing change to the usual Doctor Who civil servants because he's friendly, polite & gently witty. Secondly Sylvia Coleridge as painter Aemila Ducat, a sort of cross between Lady Bracknell & Miss Marple but with bohemian additions. There's a lovely scene between Barrington & Coleridge in episode four, which was one of the highlights for me even though it does nothing much to advance the plot.

What more can I say. It's yet another brilliant story in a Season filled with them. If you're introducing yourself to old school Doctor Who you can't go wrong with any of Season Thirteen (even Android Invasion is fun if you forget the eye-patch).