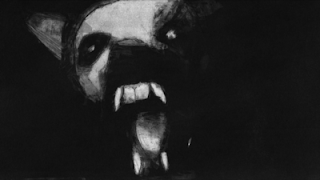 Steve Taylor-Bryant heads online to the We Are One Global Film Festival to watch the short film 32-RBIT...

32-RBIT is a joint German and Mexican production for the Guadalajara Film Festival and is playing in the Best Animated Short Film Rigo More Award category at the We Are One Global online film festival. Directed and edited by Victor Orozco Ramirez, it is a black and white animated film lasting just under 8 minutes but packs a powerful punch in its very short run time. Using animated pop culture scenes and news footage 32-RBIT, through its animation, tells us the danger of our online worlds and how detached from reality we are becoming in our desire for clicks and likes. Comparing the internet and its algorithms that answer our every question and drive our deepest desires to a glory hole was a powerful statement and Victor Orozco Ramirez, along with very unnerving sound design by Roman Vehlken, gets his point across in an entertaining and yet almost frightening way. The story in the narration of his grandmother’s thoughts was powerful, that the only animals that make the same mistake twice are human beings was spot on as was the warning that cannot just undo the damage caused with CTRL-Z.

The animation is interesting in its style, almost old fashioned, but the use of animated footage from the internet along with the powerful message in the narration makes 32-RBIT a stunning piece of cinema, one that really hit home for me but will feel like preachy propaganda for those who live their lives via online gratification. An important message played well.