Film – Mozart and the Whale 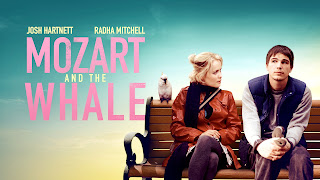 Steve Taylor-Bryant watches the 2005 romantic comedy about an Asperger’s couple navigating love and life. Mozart and the Whale is available to stream on Amazon Prime from January 22nd…

I have always been a fan of Josh Hartnett, I genuinely believe he should be a bigger star than he is, so reviewing Mozart and the Whale again after not viewing it for years was a definite for me and I enjoyed it more on this second watch than I did all those years ago when it first released. To start with I have more interaction with people on the autism spectrum than I did then, I am also a more educated and caring man than I was in my late twenties and early thirties, and I am more mature and so consider romantic films worthy more than I did when I was younger. Basically, younger me was an idiot that older me is embarrassed by and I have missed so much good stuff in our pop culture due to my idiotic notions of what was worthy. But even in 2005 or 2006 when I watched Mozart the first time I loved it. Whilst the film was about conditions that, back then, I knew very little about there was so much heart and so much comedy that you couldn’t help but smile throughout its short (by today's standards) run time. Watching it back again, with a decade and a half of personal growth and education, I now watch a more nuanced and subtle film playing out underneath the obvious romcom tropes and Mozart and the Whale is doubly enjoyable for that reason.
Donald Morton (Josh Hartnett) is a cab driver who has Asperger’s Syndrome. He’s not Rain Man levels of autistic, which I mention for two reasons; firstly, that was my only film experience of autism to this point in 2005 and, secondly, it was written (from the book by Jerry and Mary Newport) by Ron Bass who had written Rain Man. Despite seeing the world through numbers and struggling with personal interactions, Donald functions relatively well and even runs a support group in his hometown for other Asperger young people. Donald’s life changes when he meets Isabelle (Radha Mitchell), a hair stylist who has her own place on the spectrum. Isabelle is a music savant who specialises in the music of Mozart and speaks her mind directly with no filter, which can lead to confrontation. As the couple become enamoured with each other this brings up a whole new set of issues, as Donald likes chaos while Isabelle likes neat and tidy and organised, and during a dinner with his new boss Isabelle accuses Donald of trying to hide his condition and come across as normal, hiding who he is.

The comedic elements of Mozart and the Whale all land just brilliantly with perfect timing and extraordinary performances by the main cast, but it is in the moving and emotional layers of daily life and the relationship that Hartnett and Mitchell really shine. There is a chemistry between them that all romcoms need but it plays out as a real respect of each other as well as an onscreen romance. Each plays off the other well, with both having room to shine within the piece and, when you add in that they are subconsciously educating the audience as they go, you have to agree that both performances are outstanding. The film moves with a great pace, feels like a solid romcom, however there is the odd scene that almost leads somewhere a little deeper but cuts off sharply and I can't help but wonder if there is a slightly longer, more in-depth analysis version out there and maybe this edit is the palatable one. Either way Mozart and the Whale is a great watch, a beautiful take on the condition played out respectfully, and was certainly worth the time to re-watch it. Mozart and the Whale is available to stream in the UK soon and is definitely worth a watch if you like feel-good films made with respect about health conditions, like The Peanut Butter Falcon, or even if you just want a reminder that a few years ago we all thought Josh Hartnett was going to be the next big thing.
Image – Signature Entertainment
Signature Entertainment presents Mozart & The Whale on Digital Platforms now and Amazon Prime Video 22nd January