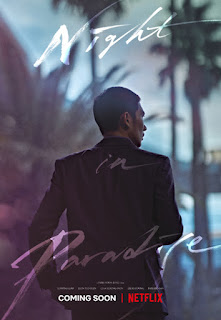 Hiding out in Jeju Island following a brutal tragedy, a wronged mobster with a target on his back connects with a woman who has her own demons.

The trailer is filled with the charismatic sense of presences of Um Tae-gu(“Tae-gu”), Jeon Yeo-been(“Jae-Yeon”), and Cha Seoung-won(“Chief Ma”). Tae-gu, who had no choice but to flee to Jeju Island on the verge of taking the last stance to save his life, meets Jae-Yeon who seems to have her own story to tell. The following scene shows Chief Ma’s brutal appearance whose goal is to ‘settle the bill’ by punishing Tae-gu. Ironically, the sharp emotions exchanged between the three main characters are portrayed in the beautiful scenery of Jeju Island, revealing the dark clouds of fate in front of Tae-gu.
Director Park Hoon-jung's previous works include highly acclaimed noir films such as New World, V.I.P., and The Witch: Part 1. Night in Paradise was the only Korean film to be screened out of competition at the 77th Venice International Film Festival.